The last two days my legs have been pretty sluggish. Today it was a little bit of a slow start but my pace finally was closer to normal.

Posted by kurokitty at 7:11 PM No comments:

Today when I was about to go running, I noticed that my Nike+iPod sensor would not turn on. I decided to just run a short route without it, thinking that later on when the stores opened I'd have to buy another one.

Just now, however, I tried it and it works! Electronics are so quirky around a cat.
Posted by kurokitty at 9:16 AM No comments:

I'm a strong believer in using training runs to actually go somewhere. Today's run was a two-fer, to check out the Inman Park Festival and also enjoy a cone at Jake's Ice Cream.

The festival turned out to be a real treat, with nice shade and lots of pretty cool vendor booths, some of which were along part of the ING Georgia Marathon/Half-Marathon route. I think I found a bunch of gift ideas for the rest of the year.

And the ice cream was pretty nice, with as hot as it's been getting. Running nearly six miles can help put a dent in that.

This race was almost entirely run within Piedmont Park and I hadn't run in a race there since the Surgeon General's 5K last June.

Weather was an issue this time around. There were some storms prior to the 9 a.m. start but only a little bit of rain when we went out to the park.

A little bit of a crowded start on one of the park's roads. I wasn't sure how fast I would want to run but eventually just being able to pass lots of people helped me into a pace. The first mile was about 7:45 or so.

Things were pretty standard for the second mile, which included running up 10th Street to Piedmont Avenue. Felt good on the downhill slope.

I misjudged the ending of the race. I thought there would be a few more minutes of running but then I hit Mile 3 and just had to kick with the rest of the runners to finish off the race.

Was about a dozen seconds off of my PR -- I think with better planning, maybe I would have been able to come close to it.

Back in 2004 when they used to have the Children's Healthcare of Atlanta Run for Children 5K, I remember the huge double hill that runs along Centennial Olympic Park.

Today's Dow Live Earth Run for Water 6K would run on part of that course, so I tried to be mentally prepared for it.

You start right off the park on Marietta and Baker. It runs backward along the last mile of the ING Georgia Marathon/Half Marathon course but doesn't turn on Means. Instead it runs a little past Burger Joe's to Northside before coming back along Techwood Parkway.

I had an extremely slow start being caught behind walkers, but for some reason I felt myself accelerating almost from the beginning. I caught up with a good crowd but dropped a lot of people in the two hills prior to the large main hill along the park.

Today, just like at the end of last Sunday's Cherry Blossom Ten Miler I decided that if I had the energy left, I would provide no quarter. I outkicked this woman who passed me near the last turn and then settled in behind a guy I was about 10 seconds behind for most of the race.

Seeing as how he wasn't moving very fast, I passed him too right before the finish.

Posted by kurokitty at 8:43 AM No comments:

Today I checked the Bank of America Chicago Marathon website and found that the registration now is closed. I'd checked every now and then in between when I registered on Feb. 15 (registration opened on Feb. 1) and now.

I guess it's no surprise. I am glad that I made the decision.

One thing I had hesitated on doing was booking a hotel room at the race hotel. This had been really great the last two big races I've run in, the ING Georgia Marathon and the Credit Union Cherry Blossom Ten-Miler.

Although there are plenty of hotels in the city, the two hotels I was looking at are booked. No matter. I would probably want to eat a pre-race meal with my folks in the suburbs and make the drive downtown to the race, just as I did more than a dozen years ago when I ran in a 5K race that preceeded the Chicago Marathon.

Today's run below. It was a little bit of improv and I tried to make sure I kept running under as much tree cover as I could.

Posted by kurokitty at 3:28 PM No comments:

Today I decided to run the Middlebear course for the first time in a long while. It was a nice course, particularly because there are lots of trees along the way.

When I was running up L2, I got passed by some dude, who was making pretty good headway. He had a five second lead on me by the top of the hill and then he started running pretty fast down it.

It was nice to do the whole route again.

Posted by kurokitty at 10:11 AM No comments: 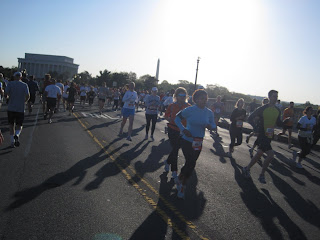 View of the Lincoln Memorial and the Washington Monument from the Arlington bridge during the 2010 Cherry Blossom Ten-Miler
WASHINGTON -- It had been a dozen years since I'd run in a 10-mile race. The last time was in 1998 in Medford, Ore., the 10-mile Pear Blossom Run.

In the Washington race, you start out by the Washington Monument and then make your way over the Arlington bridge before circling around in front of the national cemetery.

I took it easy at first -- like many popular races, this one is crowded. I also wanted to try and get some pictures during the run. It turned out that I didn't want to stop because there were so many people out but I did get a few quick shots in mid-stride (above).

I basically didn't feel like I could accelerate until Mile 6, when I suddenly started to. It felt pretty good. After Mile 9, right before the end, is a long, gradual hill. I was trying to figure out how far it was to the end when I started to approach the crest of the hill.

I decided that I would just kick there, and it turned out that the end of the race was near. I was happy with this decision because I finished pretty strong. I think I was slower than my 1998 time by only a minute.

I was happy to have used my new shoes because I didn't have any problems with my heel during the race.

Broke out my new running shoes today in a last-minute attempt to break them in for Sunday's Cherry Blossom Ten Miler in Washington.

They have much better cushioning on the heel and a lot less miles than my other shoes. I think I'll take them on the trip.

Posted by kurokitty at 12:02 PM No comments:

Did part of the Summerfest 5K route on my way to wash my car. Temperature was about 62 degrees, which was perfect for running. For once it didn't get too hot near the end of the run.

Still slight heel pain but much better than yesterday in that my running speeds were about normal.

Posted by kurokitty at 9:53 AM No comments:

My folks are in town so I didn't want to do a really long run, so I settled for the 'hood. I decided halfway through to do the full Summerfest 5K route and then at the end of that, to add the short course.

My right heel was in slight pain starting off, giving me a slow start but it got better, more like warmed up later in the run.

It nearly was too hot to run by the end of my run.

Posted by kurokitty at 8:47 AM No comments:

Today we decided to do a different run that hopefully would be a little bit easy. We crossed through the park to 14th Street and then up to Peachtree.

Once there, we headed down past the HIGH Museum of Art to Buckhead where a little store called Swoozie's is. Outside the store, my Garming Forerunner 405 ran out of juice, so I had to depend on my Nike+ iPod sensor the rest of the way. Having a backup is so helpful.

When I lived across the street from Piedmont Park I used to often run to this shopping center. It was a nice way to get in a 4-mile run.

It also was good training to negotiate the long, winding hill from that area up to 14th Street that represents the fourth mile of the Peachtree 10K. Surprisingly the hill wasn't too bad -- it's only a killer for me if I'm not in running shape.

We crossed back over 14th and ran to 10th Street and back home. It was also nice running down the slope to Charles Allen, which is the end of the Peachtree 10K.

I think it was about 5 miles, not a bad way to end the week.

Today I ran the Virginia-Highland Summerfest 5K course for the first time since the fall and added my short route to it. Doesn't it look like a butterfly on Garmin Connect?

Noteworthy was running on fallen cherry blossoms on Virginia Avenue next to John Howell Park.