Today was the first day since the Atlanta 10-Miler in which my legs didn't hurt when I ran.

I was pretty surprised at how long it took to recover from the very hilly run, especially since I thought I would be in decent running shape for it.

I was worried at the start of what would be a nearly 2-mile run to close out 100 miles for the month (for the second month in a row) because my right foot started hurting. It was the first time since the race that I wore my new running shoes.

Immediately after the race my right foot was really sore, almost bruised. I took off my shoe while I waited to get my VW Triple Peach medal and then gingerly walked to the sidewalk. I still had about 2.4 miles to walk home and I wasn't even sure about walking 5 feet!

Eventually I was able to walk a little, then a little more. Several people during this walk asked me if I was ok. But I managed and returned home.

It serves me right, since I'd only run 15 miles before the race in those shoes. In the past, it would take me 70 miles to break in a new pair of shoes to get my feet to stop hurting. In recent years, I felt like the manufacturing process was better and it was easier for people to break in shoes. Now I think I was just lucky for a few years.

Anyway, we rolled into Orme Park to play and I see this grandpa with his grandson, who is holding a homemade guitar. I'd just read in the neighborhood listserv that a child had misplaced this and parents were looking for it.

But it was impossible to explain this to the old man since he spoke no English! But eventually the kid handed me the guitar and I got it to people who knew the parents who made the request. 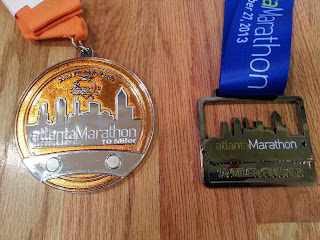 After running in 10-mile races in Washington, D.C. and Oregon and knowing other cities have them as well, I've always thought that Atlanta would do well to have this distance.

But this likely will be my only running in it, since it is so hilly.

It's easy to see how this hilly course was created -- the 10-miler is basically the last 10 miles of the new Atlanta Marathon course, starting near Mile 16 and conveniently just outside the western edge of Piedmont Park.

I didn't really know much about the course but when I saw it, I knew already there are hills that I don't even like to run in practice runs -- up Rock Springs, up Johnson Road. These are the reasons why I never wanted to try the Atlanta Marathon!

The race started near the top of the big hill at Piedmont Road, still a half-hour before sunrise. So everyone ran in the dark and I just tried to take it easy. The course was on the roads but coned off and especially when we spilled into the Morningside neighborhood, it seemed like the width of the one-lane cones wasn't enough for all the runners.

After reaching Briarcliff, the course turns on Shepherds lane near the QT, dipping down a sharp hill and then up one to Lavista. I've driven this route many times and never noticed how steep the hill is!

Lavista becomes Lindbergh after Cheshire Bridge and then the course goes down Peachtree Battle after dipping under the freeway.

The course reaches Peachtree and then ... ha ha, you are at the bottom of Heartbreak Hill as in the Peachtree 10K road race.

I don't think I've come upon so many people walking up hills in this race. Sadly, Heartbreak Hill wasn't the end to the hills. You turn on Deering Road not too long after (I was thinking we would turn on Spring), which is both parallel and behind Atlantic Station.

This is another soul-killing hill ... that leads to the 17th Street bridge near IKEA, which is another fierce hill before the end of the race.

Luckily, I took all of the hills strongly. I didn't really have much of a kick at the end, but I also didn't care that much. I just wanted the race to be over.

Walking back the 2.5-miles from Atlantic Station to home, I felt sorry for the marathon runners who were just exiting Piedmont Park and had 10 miles to go. They had no idea what they were in for.

I wonder about the future of this event, with only 1,076 people finishing. A quick search of the Soldier Field 10-Miler in Chicago reveals they had more than 11,000 finishers. The 2013 Cherry Blossom 10-Miler in Washington had 17,000 finishers. How can the city with the largest road race in the world have such paltry attendance in other events?

I know the cities are different but you can't have such a hilly inaugural and hope that word of mouth will help the next go-round. It seems however convenient a much less difficult course will help get better attendance. 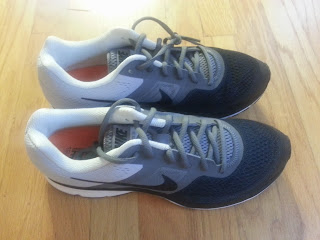 Yesterday when I was out for a 5.1-mile run, my right knee felt a little funny. Usually when that happens, it's time to wear a new pair of shoes.

So today I broke out my new Nike Air Pegasus+ 30s, which I've had for three weeks but haven't worn yet. I was hoping to get my current pair, my second pair of 29s, to 500 miles but they are only at 434 miles.

And for the last week or so when we were on vacation, I wore my trusty cheapo pair of Adidas shoes that I bought at Costco for $30 many moons ago. These shoes have been great -- I wore them as my regular walking shoe on the trip and ran in them. They have nearly 333 miles on them so their use has been a bargain at less than a dime a mile.

With less than a full week before the Atlanta 10-Miler, I'm hoping I can break in the new shoes, although they were pretty wearable today. It felt like running on a cushion of air! I tend to forget about that cushioning as the miles pile on.

Posted by kurokitty at 1:57 PM No comments: