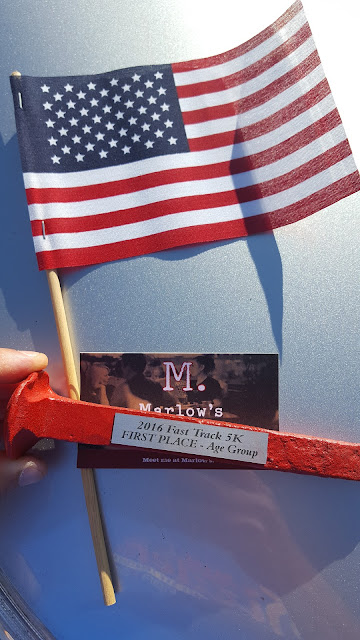 DULUTH, Ga. -- It has been seven weeks since my last race and I used the time in-between to focus on speed and conditioning.

I'd wanted to run in this race last year since it supported the Southeastern Railway Museum, but instead I ran in the Kettle Krush 5K, which was much closer to home. I'd run a PR in that race but it wasn't USATF certified, so it wasn't eligible for use as a qualifying time in the Peachtree Road Race.

So this year I signed up for the Fast Track 5K (which is USATF certified) at the last moment, thinking this course was bound to be pretty flat and I wanted to see how my fitness was prior to starting training for the Oct. 9 Bank of America Chicago Marathon.

On race day, I got up early and made the 40-minute or so drive up to this suburban city. Parking was great near the town square and it was easy to check in and get my race bib and T-shirt. There also were restrooms as part of the town square and it didn't seem like there were too many people in this race (118 people finished it).

Before I parked, I drove along the course. It looked pretty flat except for two hills in the last mile. I thought about this as I waited for the race to start. My basic plan for this was to hopefully run a 7:00/mile pace so I'd end up with a 21:40 or so and qualify for Group A of the Peachtree Road Race (you need 21:52 in a 5K to do so).

When the race started, the pace was pretty fast as there weren't too many people in the race and the course went downhill. I ran 6:36 in the first mile and I decided to run at that pace believing that I wasn't working too hard.

When I reached Mile 2 I was running a little slower (6:51). At this point the course ends its 142-foot elevation drop and begins to climb the same amount back to the start. Right after Mile 2.5 there's the first of the hills. I could see some guy in his 20s or 30s walking halfway up the hill and then he resumed running. Normally I feel like I can catch up to people who stop and walk but he finished 22 seconds ahead of me!

For most of the race I trailed an 18-year-old Asian woman (who was the first female finisher). She was making good time up the first hill and then entered the roundabout which we first passed at .55 miles into the race and now at Mile 2.67.

But instead of continuing around to the other side of the roundabout, she took the first right, repeating the early part of the course! Police at the intersection were shouting at her and I was too. But she had headphones in her ears and only realized it at the last moment. She doubled back just as I was entering the roundabout.

Over the next few tenths of a mile she surged ahead but I ended up passing her on the second hill, which is about 2.93 miles into the race.

I didn't realize that once you get to the top of the hill, there really isn't much race left, maybe a few blocks and then you enter the Town Green for the finish. I kicked at that point and finished in 21:44, the first time this year I broke 22 minutes for a 5K.

I ended up being sixth overall and placed first in my age group, winning a red-colored railroad spike. I was happy with my race time, as I didn't feel too blown up after the race (although my quads were shot the next morning).

Yet I also need to work on that last mile -- I ran Mile 3 in 7:38. It was hilly but I want to be a little more consistent with my split times.

All in all it was a great race and it's definitely one that I could put on the calendar next year!

With the Bank of America Chicago Marathon looming, I'd thought about not running in races that did not have specific meaning for my goals ahead.

That meant possibly skipping 5Ks and 10Ks as I moved forward. But today, the Atlanta Track Club gave me reason to run in those extra races because they've made it even harder to qualify for Wave A.

This year, they folded in the old sub-seed wave as well as special waves for the fastest women and the fastest masters runners and made a hybrid out of the seeded runners and Wave A.

"Several different waves starting at the same time created unnecessary confusion and no real benefit to the runners in those divisions," the track club said in an email today. "Combining those waves makes timing the runners more manageable, efficient and most importantly accurate."

Luckily, I'll still be in Wave A this year because of my 21:18 time in the Vinings Downhill 5K last August. I was considering not running in it this year but I think I will just to make sure I remain qualified for Wave A in the future.

In February I did run 45:16 in the Charles Harris 10K, qualifying for Wave A by seven seconds.
Posted by kurokitty at 1:32 PM No comments: