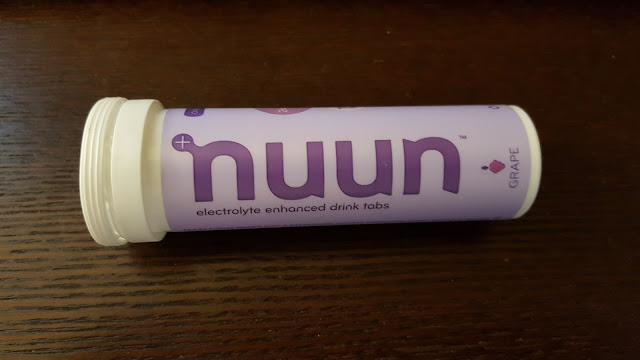 I clicked on a Costco email and was surprised to see they had a pretty good deal on Nuun, the electrolyte replacement tablets.

At many places online, four packs (of 12 tablets each) go for $17.99, shipping not included. So the Costco deal is like getting 15 extra tablets for less than the going rate.

If you end up with too many tablets, you could even consider making them into popsicles for the summer.
Posted by kurokitty at 2:48 PM No comments:

Of the many races I had on my calendar, I'd been looking at this one with particular interest. The setting, in beautiful Piedmont Park, is where I train and also is the location of my last PR, the 2010 Race2Recycle.

Although I couldn't tell before the race started, today's race basically is the same course as that 2010 race. The gun sounded and since I lined up just behind the start, the pace was pretty quick. Early on I looked down at my watch and it said 5:35. I intentionally tried to slow myself down as much as I could and still ended up with a 6:40 first mile. My original strategy was to keep everything at a 7:10/mile pace so I could break my PR of 22:20.

Before the first mile I heard the clomping of feet behind me. I thought it was a guy, but it turned out to be a woman. I decided to try to keep within sight of her, and maybe was about 5 seconds behind her for most of the race (except for the first mile when I intentionally was trying to slow myself down).

The effort seemed good. When the second mile said 7:07, I knew that I could probably run an 8:00 mile and still break my PR.

But for whatever reason, the pace was pretty good. After the final turn past the Active Oval, I just kept it up. I passed the woman (who became first overall female) and was just closing in on a guy right at Mile 3 when ... he started to throw in his kick and keep in front of me. I ran a little faster but nothing that was going to pass him. My Saucony Type A6s felt especially good during this faster phase of the race with lots of traction at exactly where my foot was striking.

At the moment I decided my intent was not to try to pass him since I was happy that I would be breaking a four-and-a-half-year-old PR. (Later when we were waiting for the awards I worried that maybe he would be in my age group but I saw on the screen that he was 31).

When I crossed the line, my watch said 21:30, breaking my PR by 50 seconds. I think all I needed were the right conditions: 1). A fast start 2). Someone fast I could pace behind instead of being on my own for long stretches of the race and 3). A course that wasn't too hilly and one that I was familiar with.

The first Masters male beat me by more than a minute but I was happy to take first place for my age group since I hadn't responded to the fifth runner's kick at the end and would have been second place had he been in my age group.

Beets: I went with my same routine, with the beet and goat cheese salad the night before and in the morning about an hour before the race I drank the beet juice that had accumulated in the beet container (no more than four tablespoons) and had the tiniest sliver of beet with bread. I wasn't too concerned about it since my goal was to run a specific time that I've run during interval training without drinking beet juice.

At any rate my legs felt great after the race, slightly sore but not really. I was able to do my cooldown run after the awards.

CHARLES TOWN, W.Va. -- Often times when I travel, my running route is a hodge podge of running block to block until I can find a park or an open area.

But today there was a nice bike path to run on to claim my 26th state including Washington, D.C. that I have run in. And, of course, there were geocaches.

The West Virginia Route 9 bike path stretches between two towns but I was only planning on running on it for a few miles. As with many exercise paths, it's never clear how well-loved -- or deserted -- one of these paths is going to be.

But this one was nice enough to run on. First off, it seemed fairly flat. You could hear cars whizz by, since the path parallels the state highway and there is only a thin wire fence (not the kind that is designed to wrap around cars in an accident and prevent them from going into other lanes) that separates you.

Yet in the morning, the road wasn't really that busy. I passed a few people out walking and one runner on the way back.

At a few spots historical signs detail what used to be standing nearby. The entire area was pretty beautiful and reminded me of last year's trip to the Belgian countryside, especially with this orange flower on the side of the path that resembled the poppies that grow wild in Europe. 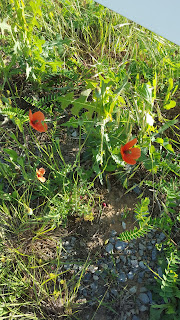 I decided to run my usual four miles and because I was traveling, I dusted off my Skechers Go Run 3 shoes that I retired in April after I felt knee pain running with them. They are so light and are great for throwing into luggage. The shoes performed admirably in three outings -- one here and two in Virginia.

I skipped doing intervals last weekend because we were enjoying the Georgia coast on Jekyll Island. So this week it was hard to get back in it.

Even when I started the first two intervals I wasn't sure I would finish them. But I got a second wind and things got easier. On the very last one, a cyclist passed and I was able to pace off of the bike that was pretty far ahead. Even so I was surprised with the result -- a pace that was the equivalent of a 6:46/mile.

These workouts are still needed since this spring I was busy being a click monkey and I'm about to have a busy summer/fall full of races:

I signed up for this evening's May the Fourth (Miler) Be With You race at the last minute thinking why not, since it was going to be held in nearby Piedmont Park.

Another carrot was that awards were going to be three-deep in age groups and it could be a good opportunity to make a PR in a 4-mile race (I've only run in four of these prior to this).

What I wasn't sure about was what an extra mile in a race would do to my run speed and also what it would be like to run in an evening race with evening heat (81 degrees).

The race started fast and I was constantly trying to keep my pace down -- it started around 6:30/mile pace and then was hovering around a 7:00/mile pace when I encountered a puzzle.

There was a directional arrow for the race in between the fork that leads up to the Atlanta Botanical Garden and down by the tennis courts. Since I've run in several races here, I took the path near the tennis courts.

When I rounded the corner, I immediately knew I was in the wrong -- there were no directional arrows pointing up the path. So I turned around and went back to the way everyone was running -- a third route in between the Active Oval and the tennis courts.

It added .15 mile to my race. What happened was when the race started I was behind five runners and the first four quickly left our sight. I was behind a guy with a green lightsaber and he went the correct way and I did not, thinking he was wrong. After I backtracked I noted where was on the turnaround and that he was now a minute ahead of me.

At that point I decided not to worry about pace and then just ran evenly. I ran into another conundrum down the path to the dog park -- there appeared to be a turn onto the boardwalk that cuts over to the dog park.

One lady (who ended up being overall Masters female) asked which way to go. I saw two runners up on the path to the dog park so I told her the path was the way to go instead of the boardwalk. But when we reached the part of the path the boardwalk runs into, there was another lady running down it! She yelled something at the lady and at first I thought there was going to be some kind of argument over cutting the course. But they eventually continued on.

After exiting the bowl, the lady who became overall Masters female asked a guy which way to go. I was thinking we would turn to go up the path that parallels 10th Street but he said straight. I'm glad he was there at that moment because it was the correct way to go.

I knew the incline up the path near 10th Street would be a little bit of a bear. When I got to the base of the hill, the guy with the lightsaber was at the top of the hill and had slowed somewhat. I ended up passing him down the switchback back to the bottom of the hill.

When we exited the switchback, I was in unique territory -- I was in the exact location of my 400 interval training with the end of the interval at the race finish!

So I decided to wait until then (although my data says at the end of the switchback I was running at a 6:47/mile pace) and then I took off down the path to the finish like I would starting an interval. I decided I would remain in that gear as long as possible, saving any kind of kick if the guy with the lightsaber passed me.

But I could hear he wasn't and in the final turn only started my kick -- I ended at a sub-5:00/mile pace!

It was a great race -- at first I thought I was third overall male but then when they had the results on a small flatscreen I could see I wasn't -- the three men and one woman who finished ahead of me beat me by 5 minutes!

But then I noticed they were all in their 30s, putting me in the very unique spot of being the first Master's male.