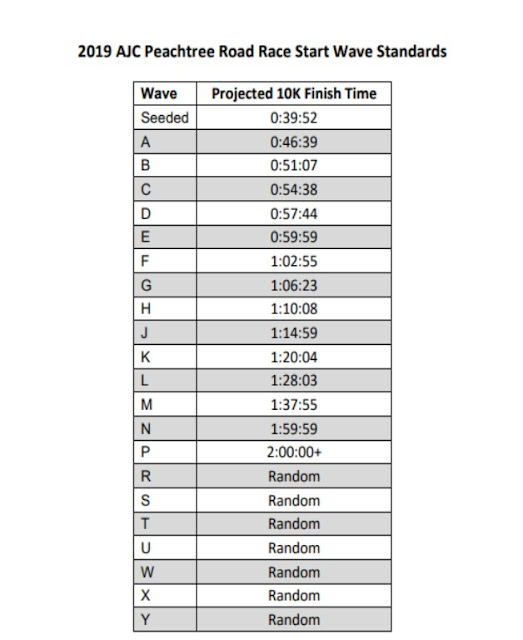 The new time standards can be found here. In applying for the 50th running of Atlanta's annual July 4th road race you had to submit a recent race time in order to not be randomly placed in a late starting wave of a race that attracts about 60,000 participants.

It makes a huge difference since the later the start wave, the later you start and the warmer it is on the course as the summer morning temperatures rise.

Presumably the 10K's time standards shift each year because of various numbers of applicants for each start wave and to make sure each one is not too crowded. Yet runners don't know if the race times they submit will qualify them for a particular starting wave because the time standards aren't released until a few months after the registration deadline in the spring.


It's a little harder, however, to be placed into the next six waves compared to last year. This year, you need to have a projected 10K finish breaking 1 hour for Wave E (last year it was 1 hour, six seconds) and Wave K is four seconds more stringent at 1:20:04.

Also this year, a 10K time breaking 2 hours will get you into Wave N and a submitted time of 2 hours or more is good for Wave P. Runners without submitted race times are placed randomly in the remaining seven waves (R through Y).
Posted by kurokitty at 2:59 PM No comments: 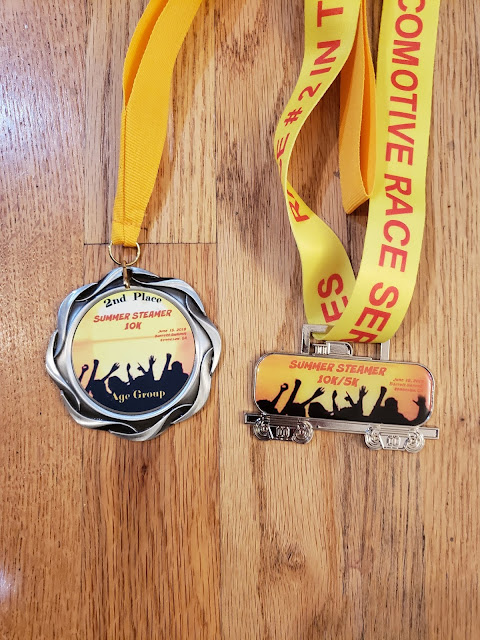 KENNESAW, Ga. -- I haven't done any speedwork since well before April's Revel Mt. Charleston Marathon but with the Peachtree Road Race coming up in three weeks I wanted to race the 10K distance. I also wanted to put the new Hoka One One Carbon X shoes to the test.

So I decided on this race in the suburbs. It's on the same day as the Chattahoochee Nature Center's Possum Trot and I chose this one because of the other race's seemingly huge hill at the end (that really wasn't so big after all).

For the 10K, the race is two 5K loops that begin in an office park before going on a few streets and then through the paved Noonday Creek Trail and then back to the start. My race also started at the same time as the 5K so at the start I wanted to be sure that I held my pace in check as to not run at a 5K pace and then have to slog through the same distance again.

The start/finish gate was a little narrow and I started several rows back from the start. It turned out I was pretty far back as I was six or seven seconds behind the gun time. When I started there was a whole group in front of me and I wondered with my 7:30/mile pace if I was even going to run closer to the 7:15/mile pace I'd need for a PR.

There were a few people around me in the beginning and I could even see a woman running with a few dogs as we approached the turn for the second street we'd run on. I was pretty amazed since she was with the front group!!  I ran the first mile in 7:23.

After Mile 1, the course turns on Barrett Lakes Boulevard and is a 56-foot incline over .46 miles to Auto Park Drive Northwest. It is a little daunting but gradual and I made my way up it. Then it dips and resumes another climb of 58 feet between 1.55 miles and 1.8 miles when you turn onto Roberts Road. It starts to be screaming downhill until 2.31 miles when you enter the Noonday Creek Trail. (My second mile was 7:15).

At this point there were some people behind me and I was pretty much drafting off of a kid. On the bike trail he joined up with another youth and I decided to not keep running as fast since it was becoming apparent most of the people in this spot were running in the 5K and were kicking to the end of the race. Indeed when the turn off came for the 5K finish I was the only one running! My third mile was 7:18.

At this point running through the office park I could see one guy already on the streets running way ahead of me and although I thought it would be nice to catch up I decided to not press it too much. Mile 4 was in 7:18 right before the turn for the hill.

The guy looked behind to see where I was before he turned to start the Barrett Lakes climb and I was still a good distance away. Maybe halfway up the hill I could see one other woman starting the turn at the top of the hill (she finished in 44 minutes and change in seventh place overall and I wouldn't see her the rest of the race).

So it was just me and this guy. I think I passed him somewhere on Auto Park Drive before the next turn on Roberts. (I ran this hilly Mile 5 in 7:28 just after the turn) I was a little worried since I didn't want to run too fast and blow up but once I got onto the bike path I decided I would run as fast as I could with some in reserve and then make a decision if I got passed.

I kept pressing and when I exited the trail and got to the short .05/mile turnaround before the end of the race I could see the guy was still on the trail and I probably didn't have anything to worry about. Mile 6 before this turnaround was 7:06.

When I got into the office park, there was a guy telling me to turn right where the 5K finished in the first loop and another guy telling me 10K was straight. So I kept straight for a few feet and the first guy was really yelling loud at me, so I stopped and turned around and confirmed, "10K?" When I got that confirmation, I turned around and then loped through the chute at a 7:19/mile pace, much slower than I normally would kick.

I finished in 45:28 for eighth place overall, 12 seconds above my PR, good for second in my age group (first place was a guy wearing Vaporflys who ran it in 42 minutes so I wouldn't have had a chance anyway).

I was happy with this race since I haven't done any 10K specific speedwork as I was focused on recovering from one marathon and just now starting my Chicago Marathon training. I enjoyed running in the Carbon X -- it felt very smooth throughout but I also feel like in a 10K I prefer the Nike Zoom Vaporfly 4% as I feel I can generate my top speed at the end of races much faster. I probably will use the Carbon X for the marathon however.


Posted by kurokitty at 2:38 PM No comments:

Now that the Revel Mt. Charleston Marathon is past and I'm a few weeks away from my training cycle for the Bank of America Chicago Marathon, I wanted to jump in a few local races.

The Virginia-Highland Summerfest 5K is my neighborhood race and this year was my seventh running of it. I hadn't run it since 2015 since at least for me, the course is pretty brutal with lots of rolling hills in the last mile. This year, however, I just thought I'd run in it. It also helped that I saw that I should have run in it in the years since 2015, since it looked like my average 5K time in a hilly race of 22:30 would have placed me in my age group each year. So it goes ...

This race felt difficult for me and I did my best to keep up. I didn't even want to look at my watch during the race out of fear that I would be running like an 8:30 mile through the hills. My second mile was in 7:08.

Then the really hilly portions happened and I felt like I wanted to quit but just kept on going. Mile 3 was 7:40. Up one hill, then down and up to another and then through the famous Virginia-Highland intersection and on to the final hill ... and then down two streets to the finish. When I turned I was surprised the finish was not too far away -- in years past it is slightly evil as it finishes on an uphill grade further up the street. I just tucked in behind a younger guy who passed me and kicked to the finish.

Afterward I chatted with the dad of one of my daughter's preschool classmates (who beat me by 17 seconds) and I wasn't sure if I placed in my age group or not until I received an email with the results. I placed third in my age group and was pretty elated since I'd never placed in my six previous attempts, even though my times in 2010 and 2015 were very similar to this year's.

The guy announcing the awards recognized my name as he came to it and said something to the effect that he's announced my name many times before. It was nice to get out there today even though with the heat and the hills it was a little bit of a struggle.