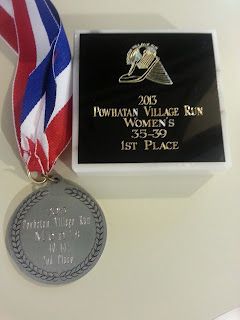 We decided to run in this race at the very last minute. It looked like this race was in the next town over from where my in-laws live. It's usually never very pretty for me to run the day after I've been in a plane or a car for a long time.

I thought for sure, given that we had just run in a tough 5K race last week, that we were going to take this one easy. I've had some strange left ankle pinging when I'm not running and I really didn't feel like going all-out in a race in which previous race data made it seem like the locals could run pretty fast.

As expected, this race had a really fast start. I felt myself even trying to slow myself a little bit. But I guess I just tried to fall into a good rhythm the first mile. The second mile came and went and our split was something like 16:12.

I was a little surprised of that pace and then just felt like I wasn't really in the groove today. But then the third mile came and I wanted to keep ahead of a few people we had passed. I intentionally didn't look down at my watch until it was 3.54 miles.

The turn to the park where the finish was came soon enough and I willed myself to try to catch up to the couple of people ahead of me.

After I finished I turned around and saw the wife making her way up to the finish. I didn't see many female runners near her so I knew she had a great chance of placing.

So we waited for the awards -- and sure enough, she placed first for her age division! Then it turned out that one of the people I passed in the end had a time good enough for third place in my division!

I was pretty psyched then ... and happily picked up my 2nd place medal. The 4-mile run also gave me 100 miles for the month, which is something I haven't done since January.

Looking at the data, my best mile was the last one, with a 7:26/mile finish, which was decent but I had been able to log two of those in the 5K only a week before.

I guess it's one of those things, each race is different and your mileage may vary when it comes to race performance from week to week. This race was great -- I think we surprised the race director when we showed up from out of state for this race -- and I look forward to running in it next year!

Or so it seemed. The race started -- as with local races, there's always some kind of quirk, and this one was that when the gun abruptly sounded, I wasn't even sure where the starting line was! So I set my watch and then started running with everyone.

There was one lady with a triple stroller who was just really booking it. It seemed hard to believe she could even continue her pace.

Somewhere before the first mile with that stroller lady leaving us in the dust, the first big hill came and I decided I would just run at my own pace instead of with the wife and stroller. As we crossed back over I-20, I didn't even think I would be able to catch the triple stroller lady!

But as it turned out, she stopped for water at 1.5 miles and then had to stop after that because one of her children was crying. I continued on.

I felt like I was running good and my effort really only was about 70 percent. Near the end of Boulevard on the course I fell in behind some dude with a San Francisco Giants T-shirt jersey. The pace was good but I passed him as the course turned down a pretty decent hill.

I settled in behind another guy but when the road went uphill, I quickly passed him. Then I passed another guy, who right near the end of the race started to outkick me. Here I thought, "OK, I've been outkicked before at the end of races."

But as I followed him, soon I had a pretty good burst (turned out it was 5:44/mile pace!) and passed him and two other people as I ran into the finish line.

The gun clock said 24:18, which is good enough for Time Group B of the Peachtree 10K next year. My watch time said 23:53, which is a pretty good showing from the race I ran in last month.

When I got home I looked at my splits and despite having a slow 8:30/min mile, my last two miles were at a 7:26/mile pace, which is more than decent to qualify for Group A of the Peachtree (you need a 7:37/mile pace in a 5K for that).

So things are looking good. Since the last race I've basically been running at least 3 miles a day, so I guess the extra effort paid off.