An easy 6-mile run was on today's schedule, one day after completing a long run at a moderate pace in which I unwittingly ran two seconds faster than the PR I set for the 10-mile distance last October.

When I entered the park, I turned on my new app for Pokemon GO, an augmented reality game that lets you collect Pokemon characters in the wild. I knew the park would be perfect for this.

Just off the path in the green bowl near Park Tavern, I glanced down at my phone and could see the digital rustling that takes place when one of these monsters is near. It turned out to be a rattata, a kind of rat in the game (which uses your phone's camera to blend the creature in with actual surroundings as in the picture above).

After a few flicks of pokeballs, I captured it and added it to my Pokemon collection.

I've found over the years that augmented reality games such as this help me run in actual reality. They can give me easy focus on creating new running routes especially during pretty detailed running schedules like the one I'm currently on. When you have to grind out six- to eight-mile runs almost daily (or have been running every day for the last 9.5 years), it can be difficult to be motivated to do the same courses over and over.

I've frequently run in the park to play Ingress, the other virtual reality game by the same creators as Pokemon GO.

This time around, however, I've been able to leave the phone in my pouch when the workout calls for running at a specific pace. It does give me an incentive, however, to make sure I finish with enough time to see what might be lurking in the digital expanse of what we know as Piedmont Park.
Posted by kurokitty at 7:36 PM No comments:

For sake of full disclosure, I'm eating a pint of Jake's root beer ice cream as I write this, trying to cool off a few hours after the race.

My 12th Peachtree Road Race was run on one of the hottest race days in recent memory -- 77 degrees and very high humidity. Despite this, I went into this very confident, as I'm now 5 weeks into training via Hansons and have been crushing my workouts and higher mileage.

So at the last moment I decided to throw caution to the wind and wear an all-black kit, from shirt to shoes, wearing a black tank top depicting a leopard's face with sunglasses from the rock-n-roll marathon series. It turned out that the shoes I wear for intervals (Brooks Pure Connect 4) are black, so they rounded out the outfit.

My father-in-law drove us up Piedmont as far as he could, dropping us off about a few blocks from Peachtree Road. This is what we did last year using the shuttle service from Phidippides. Although we walked maybe a mile to our corrals, it's way easier than jumping on MARTA and having to wait for a train and then be in a crush of people inside and out of the train.

We turned into the staging area at Lenox Mall just as the elites were walking out in a big group and we passed by Jared Ward, who will be going to Rio as the third place finisher in the U.S. Olympic Trials for the marathon (he placed 5th in this race).

After wishing the wife a good race, I tried to do a short warmup but was a little discouraged by the Corrals A-E fence -- it was simply too hard to go out of it to run around in Lenox when so many people were trying to get in. So I ran back up the hill and got into the Group A corral maybe around 7:15 or so.

It was a little late to do so, as I ended up near the back and there continued to be a crush of people in this group. So I had to stand there for more than 10 minutes, it felt warm and I was sweaty just because of all the people around me. When the national anthem was sung, I happened to be directly below the giant flag they have up for the race and kind of felt like being in the first row of a movie theater.

The race started and it was pretty congested. I guess you expect this for this kind of race and at least everyone I could see was running, but it was still tricky to get out to pace. My plan was to run 7:20/mile the first three miles and then seeing what happened. With all of the people running around me, I ran the first mile in 7:30.

Maybe a little after mile 1.5, near Moe's Southwest Grill (they didn't throw anything out this year), the spacing was a little better and I settled into a decent pace. I didn't want to run faster than 7:20, but I ran miles 2 and 3 in 7:16 each.

Mile 4 includes the first of the two big hills on the course. I could feel myself slowing but at this point it was so hot as to be uncomfortable. I just settled into any pace that I could and just wanted to finish the race. I ran this mile in 7:48.

Mile 5 was really no different. I'd toyed with the idea of getting water here (really don't know why I didn't). It was just that my head felt hot and I didn't feel thirsty. It felt like it took a lot of effort to get to 14th Street and I ran this mile in 7:53.

The last mile was both easy and hard. I knew how much more I had to go but I just didn't have great speed to do so. I ended up speeding up a little in the last mile for 7:25.

And then I was done at 47:05! They didn't have some things I'd seen in the past, such as slices of pizza from Mellow Mushroom and later on I saw they didn't have Blue Bell ice cream sandwiches this time.

So I made a bee line to the Atlanta Track Club tent and got my drink tickets and settled in to eat some delicious peaches and so-so beer. While I waited I was a little concerned that maybe the heat would be too much for the wife and that she would have to walk but after a while she texted that she finished in 51 minutes and change.

Despite the heat, I finished 23 seconds slower than last year. And it turned out the heat affected everyone. This year I finished with the highest placing that I've done in 12 times, finishing in 1,661st. (Last year my 46:42 was good for 2,170th place). Obviously the placing doesn't mean anything but it made me check the web site to see what the cut off was to be awarded a race mug (it's the first 1,000 finishers). 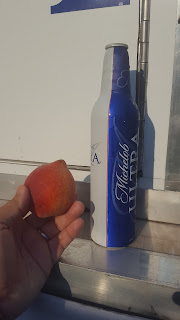 Posted by kurokitty at 2:41 PM No comments: