I was able to get a short run in to Piedmont Park this morning before taking my parents to the airport, marking nine consecutive years of daily running.

The streak (now 3,287 days for 12,338.53 miles) has always been more of a trick for me to keep me active. I found in the years that predated it all the way to when I was 16 that if I didn't run continuously I would find ways to not run and then months would go by before the next time I put on shoes.

In the earlier years I used to use it as an excuse to not try to run fast and injure myself. I don't think I really knew much about training then. It's only been in the last few years with the influence of the Hanson's Marathon (and Half Marathon) Method that things have sunk in.

I still remember ending last year and not knowing what direction my running would take for 2015. And then I ran my first sub-7 minute mile in nearly two decades in the Hawks Fast Break 5K in February and was completely hooked. It led to PRs in the 5K, 4-miler and 10-mile distances. I also picked up a bunch of age group awards and my first ever Master's overall award in smaller races.

So for next year I plan to keep it going, with goals to hopefully finally break my half-marathon PR that's lasted since the first time I ever tried one, nearly 18 years ago. It would be great to PR in the 10K as well.

I'll have extra time from kiddo duties in the fall and I hope to possibly train for another marathon, maybe for early 2017.

Who knows, though? I should know by now that I just make up my plans as I go along.

This year has been one of the crazier ones when it comes to running shoes for me. I have no less than five active pairs, not counting my racing flats, although three of them are nearing the end of their lifespan.

I have a pair of Nike Air Zoom Pegasus+ 31s, they are the oldest with 404.39 miles on them and I mainly use them when I run with a stroller. I still have my Saucony Iso Zealots (382.93 miles), an old pair of Skechers Go Run 3s (375.86 miles) and my Brooks Pure Connect 3 shoes, which have 58.31 miles. I bascially retire them when they hit 500 miles, so if the three oldest shoes are still in my rotation, it will be a while before any of them gets retired.

The other day my in-laws gave me a gift card to Dick's Sporting Goods and I found a great deal there -- a pair of Skechers Go Run Ride 4s for about $60, which is my eternal sweet spot for running shoe purchases.

Today I got to try them out on a 6-mile run in 35-degree weather. They felt light but they also were cushioned properly (my old complaint with Skechers Go Run 2s and the Go Run 3s were that they were light but I could feel it if I stepped on a rock on the sidewalk).

I opted to use the additional inserts that came with the shoes (the yellow items with the shoes in the picture above). I don't know if that increases the drop from 4mm to 8 mm or more but it felt well worth it during my run to Atlantic Station and back.

The last two days have finally been cold (what a difference a week makes!) -- it was 33 degrees yesterday and I wore a little more layers than I should have but today I think I wore the right things. I thought I was going to run 10 miles today but my legs thought better of it, just a week after running in the Jeff Galloway half marathon.

At the nice expo for the Jeff Galloway 13.1, I wistfully looked over at the Publix Georgia Marathon and Half Marathon booth but at $65, it was still too much for me to go over and sign up, especially since I've participated in the event six times.

But today is a different day. The Atlanta Track Club announced they've acquired the race that was their main competitor in the city and are now offering deals today.

So ... of course I signed up. The deal is only good today, after that the entry fee goes up on a sliding scale towards Christmas. And the $26.20 discount is only good today. Afterwards, the standard discount for track club members applies.

I signed up for two half-marathons in less than 12 hours. Someone stop me!
Posted by kurokitty at 9:38 AM 1 comment:

In the race packet for the JG 13.1 was a coupon code that would reduce the early bird price for next year's race from $69 to $49.

But you have to register between today and Jan. 9 to get the offer. Tonight I decided to go ahead and register and it turned out that with the coupon code, the race costs even less --  only $42 ($39 for the race and a $3 fee).

Even better! It reminds me of the early years of the Publix Georgia Half Marathon where you could get in for $25 if you were one of the first 100 people to register.

I love great registration fee deals. My best marathon deal was registering for last year's Honolulu Marathon for $55 (it was only $26 for Hawaii residents). I doubt I will ever run another marathon for that cheap again.

So count me in. (I would have run in it anyway no matter the cost since I want to attain the race's five-year streaker status since I ran in this year's race and ran 13.1 miles with a stroller in March just to get credit for the 2014 race as a virtual runner).
Posted by kurokitty at 10:19 PM No comments: 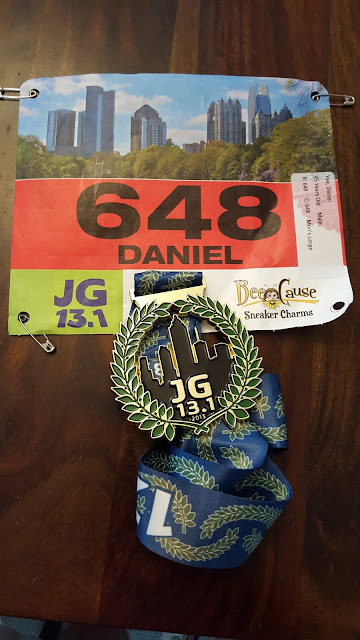 Just 17 days ago I was pretty upset with myself. Right before Mile 7 I bonked and I knew that having one of my best race times in the Thanksgiving Day Half Marathon would not even be close to reality.

I blamed it all on lack of running, running too fast at the start and not fueling properly for the race.

But this race, the JG 13.1, loomed. Seventeen days really wasn't enough time to fix any running issues I might have had in the last race. Plus I was eager to give myself some downtime after a busy running year and look forward to next year's goals.

So when race day came I told myself I would just do the best I could. I did try to help myself fuel better, eating half of a peanut butter and jelly sandwich and half of a banana before I left home at about 7:20 to get to the 8 a.m. start (it's nice to live close to the start!). I also packed four GU gels, telling myself I would try to avoid bonking at Mile 7 by consuming the first one at Mile 5.

Since the start line was only two miles away and the finish just a mile, I opted to leave the car at home. I ran a warm up run from home through Piedmont Park and then walked up the large hill on 12th Street to get to the start.

Before the start, Jeff Galloway, whose name is attached to the race, advised runners to run the first three miles slower than their typical pace. I thought this was good advice because of the rolling hills on Juniper Street in Mile 1 and the hills along Central Park to Mile 2.

I thought I would run faster on the downhill section on Freedom Parkway and to the Carter Center, and while I did, it wasn't really enough to erase the deficit of time I was building on top of my PR time.

By Mile 4 I was 44 seconds behind PR pace.  At Mile 5 on the Eastside Beltline Trail I used my first (and only) GU for the race. I wanted to make sure I wouldn't bonk near Mile 7 like in the Thanksgiving race.

Really at this point I was skeptical of breaking my PR and so I just decided to run solidly through the race. Up hilly St. Charles Avenue to Mile 7 I just told myself that I was a good hill runner and didn't try to pay attention to the time. (At this point I was 1 minute, 3 seconds slower than PR pace).

It was nice that we entered my home neighborhood of Virginia-Highland. Part of the course here mirrors the Publix Georgia Half Marathon and it felt familiar. After Mile 9 on 10th Street at the edge of Piedmont Park I found myself running by myself with no other runners near me. It was a weird feeling, since in many larger races you nearly always have runners around you.

Once we entered Piedmont Park Commons past Mile 11 it felt very comfortable for me, since this part of the park is part of my tempo run trail -- and where I've single and double-strollered many times.

After rounding the bowl, we ran along Lake Clara Meer, where I do the bulk of my interval training. Only this time I didn't have any speed in me and wasn't too concerned about my finish since I could hear the announcer report a 1:45 finish for some runner and I was only on the south side of the lake.

A little bit later, I saw my watch said "1:46" and I knew I didn't have any chance of making a PR. I was amazed, though, when I finally looked at my watch after crossing the finish that it said 1:47:34, my third fastest race time and only 56 seconds off of my PR. (Incidentally I later saw my watch said the course was short at 13.03 miles, although my friend Anna recorded a 13.13 mile course).

Here I was about to write off this race before I even ran in it today and instead got back confirmation that my running shape is not as off as I thought. In any event, it's something nice to build on for 2016. 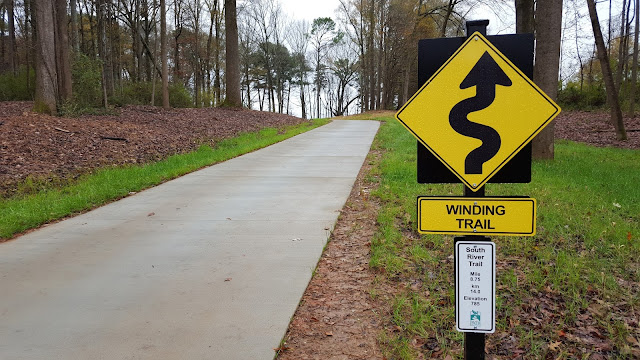 It was raining a little bit today so I decided to not do the double stroller to take the little guy to preschool. After I dropped him off, I still had a run I needed to do to continue the streak.

So I decided to take the 14-month-old on a single stroller ride on the PATH Foundation's South River Trail, the newest section connecting Gresham Park on the southeast side to Georgia Perimeter College. Round trip I got a 6-mile run out of it, something I'll take any day.

The trail follows Sugar Creek, crosses under Interstate 285 and then parallels the South River. It was mainly flat with some hills on the western part of the section. The path looks a little unfinished, with sawed off logs strewn along the path and metal posts that likely will become fences. 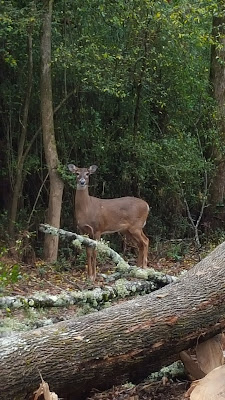 After parking at Gresham Park, I had to make my way over Clifton Church Road to find the start of the trail. There is an existing section of the South River Trail that goes west toward Bouldercrest and Constitution roads but apparently the new trail does not yet connect to the trail.

It only took me a minute to find it and I was on my way. In the middle of my run I happened upon three deer crossing the path. One deer stopped to watch the strange stroller runner, allowing me to get a decent shot with my camera.

At Georgia Perimeter College I reached 3 miles so I didn't feel the need to run any farther. So I turned around and made my way back. It's pretty neat these trails exist all over the Atlanta area.

Posted by kurokitty at 2:28 PM No comments: