Day 3,732: Wanna run a half marathon for the cost of an overpriced 5K?

The blitz is back! I noticed a Facebook posting tonight showing great deals for the early bird registration for next year's Publix Georgia Marathon and Half Marathon!

The rates are basically 50 percent of the highest price for those events, for a limited time. Thus, $50 for the half marathon and $70 for the full marathon.

But wait, there's more! If you're an Atlanta Track Club member, you get an even bigger discount on the base price. It would cost $43.50 for the half marathon ($6.50 discount). That's basically like getting to run a half marathon (with all of the perks) for the price of a 10K or an expensive 5K today.

Despite the great price I think I'll be skipping the race again, since I have other races around that time next year already mentally marked on my calendar.

But don't miss it if you're thinking of toeing the line again!
Posted by kurokitty at 9:32 PM No comments: 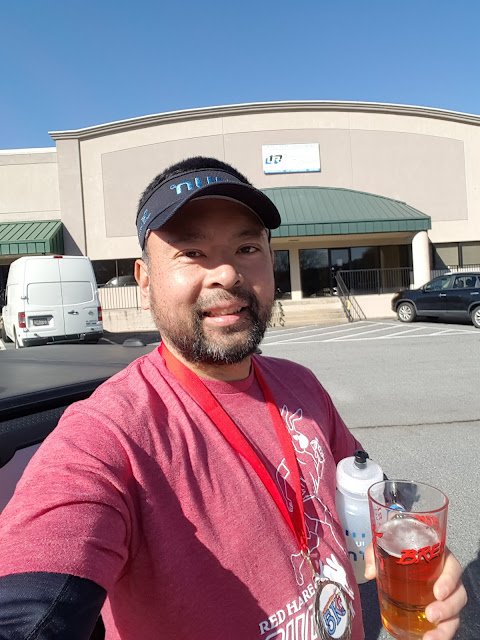 MARIETTA, Ga. -- After about a year and a half, I returned to Red Hare Brewery to participate in another one of their great races.

Unlike when I ran in the Red Hare Chase 5K in September 2015, this race was held in the winter/spring and by a different racing company, Five Star NTP (which held the May 2015 race in which I had my first Master's win).

Despite the change I thought the race course would pretty much be the same, hilly for the first two miles and then screaming downhill for the finish.

Unlike in September, it was pretty cold this morning. I decided to not do two layers, instead depending on arm sleeves I picked up the year before at the Atlanta Track Club's warehouse sale (for $5, a great deal!). I also drove there an hour early to make sure I got a good parking space.

The race director announced it would be an "out and back" course, something I just thought he meant the loop that the previous race followed. When we started out I wanted to make sure I was running steady at about a 7 minute/mile pace to preserve myself for the hills in the middle part of the course.

The first time I realized something was different about this race was the fact that halfway down Cobb Parkway I could see one of the race leaders coming back up the road toward me. Then a few steps later I realized it was a literal turnaround after the first half of the race!

At this point I decided to run aggressively up the few remaining hills back to the start. I was passing people, including some who I thought might pass me back in the remaining part of the race, but no matter.

After the turn off of South Cobb Drive it was downhill and I was trailing a guy younger than me who was running pretty fast. I followed him for about a half mile and just pretended I was on a interval training session. He kept a few seconds ahead of me but my confidence increased in the last few meters before the finish because I could see I was gaining on him.

But I've since learned that with "PR"s even in non-certified courses, it has not taken too long for me to make or surpass that mark on a certified course.

I ended up with first place in my age group and of course, the post-race party that included six 6-ounce pours of beer and hot dogs from Whole Foods and wings from Taco Mac (I didn't eat any wings but I did win $5 towards my next visit at Taco Mac).

Once again it was a nice event and I look forward to participating in more races there!

I've been on a quest to find light, low-drop running shoes ever since I ran in the Saucony Kinvara 5 in preparation for the 2014 Marine Corps Marathon -- and didn't like how my feet felt when I stepped on a rock while wearing them.

When I bought these shoes I immediately loved what I had -- a light, low (4 mm) drop shoe that seemed ready to rock right out of the box. It was versatile for both running solo and stroller runs in the neighborhood. The Lunarion cushioning is great and I don't fear stepping on rocks in the park anymore. (Sometimes small bits of gravel will get stuck in the hexagon-shaped sole).

At some point last summer when I was training for the Chicago Marathon I injured my right heel and it made it unpleasant to run in these shoes. Even in September when I was testing various shoes for Mizuno I thought that these shoes were too light for me and that I might be better off with the Lunar Glide.

But after that, the shoes really grew on me. Maybe it was because I was no longer running higher mileage or high-mileage races. They seemed to improve as I got closer to 500 miles and are light enough (8.8 ounces for size 10) that they are my go-to shoe whenever I need to travel. I even thought about racing a 5K in them but really don't like the idea of doing so with a shoe that has so many miles.

I have a second pair of the RN Distance that I bought last fall, before my heel injury and am looking forward to continuing running with it. My newly retired pair likely will be stashed in my weekend bag (replacing an older pair of Skechers Go Run Ride 4s that will go to donation) for short getaways.
Posted by kurokitty at 2:31 PM No comments: