I really enjoyed running in the Atlanta Beltline's Southwest 5K four years ago and decided to add this one to the calendar.

The current race, however, is slightly different from when I ran in it previously. It starts and ends at West End Park. The Southwest 5K also included cross country elements, such as running a grassy unimproved stretch of the Beltline for the start. Today's race was all on asphalt or concrete.

The race announcer said this year had the most participants for this race and you could kind of tell near the start, which was delayed 15 minutes so race officials could process a large line of people who still hadn't gotten their bibs yet. (It looked like almost 100 people before the race).

I'd already done my mile warmup prior to the scheduled 7:30 a.m. start. There was really nothing to do but wait.

When the gun started, I took off with everyone else running along rolling hills of city streets for the first six tenths of a mile until the course wound around to the Beltline concrete trail.

I can tell by my data that at 1.22 miles, my cadence fell apart. I started to run slower and was passed by several guys with gray hair, including the guy who ended up with 1st place in my age group (he ran it in 21:11, which would be a PR for me and nothing I probably could have shot for this day).

Still, I tried to keep up as well as I could. I ran Mile 2 in 7:17 and at that point the race leaves the Beltline to to a turnaround on Langhorn Street SW. This meant going down a hill and going up the hill on the turnaround, so you can see who's ahead of you and who's behind you.

The hill ends at about 2.6 miles when it turns on Oak Street Southwest and it is mainly downhill from here. I ran Mile 3 in 7:23 and waited until the last turn to the finish to really kick. My watch has me running the last .05 miles at a 5:34/mile pace.

I finished in 21:45, which I was kind of surprised to do. Still, my watch had me short of 3.1 but I felt like it was a good effort, even though I need to work on my endurance for the latter half of the race.

I walked back to my car and changed my shirt and got some nuun to hydrate before coming back. With all the gray haired guys who passed me earlier in the race I wasn't confident I even placed in my age group but was happy to have placed second.

This race felt like a good warmup for future 5Ks. I have specific things I want to do with my 5K training and feel like a PR will be waiting ahead. 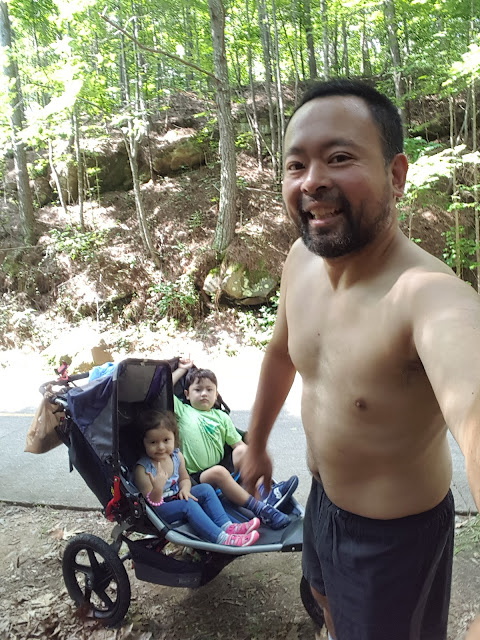 DALLAS, Ga. -- I had to replace a geocache I have on the Silver Comet Trail so we headed over with the double stroller.

I don't normally go shirtless but I ended up having to because the only shirt I had on me -- or in the car -- was a cotton T-shirt from the Richmond Children's Hospital Foundation 4-Miler  from September 2013.

In no time that shirt started to get soaked in the 79-degree, humid weather. Normally I'll wear a technical T-shirt on runs but when I do any kind of geocaching that involves woods I don't. That's because sticks easily catch on those kinds of shirts and they end up tearing or being pocked with holes.

We parked at the Rambo Trailhead, had a brief picnic at the tables there and then headed on our way.

Right before we got to our geocache, we had to enter a tunnel that goes under the street above. When we were in it, we heard a mechanical whirring sound from a car -- that's not a good thing to hear when you're in the middle of a tunnel!

I turned around and it was the smart car of the Paulding County Sheriff's Office on patrol! As soon as I exited the tunnel, I pulled aside to let them by. Two officers were crammed in the little car.

It's nice that they continue to patrol this section of trail. I saw one runner, a lady walking her dog and a few cyclists while we were here.

It felt nice to run shirtless, and it really didn't feel too different from when I wear a singlet.

Later on we drove over to the trailhead in Hiram for a short geocache hunt while the kiddos ate Chick-fil-A icedream cones in the stroller. It was a nice outing for everyone involved!
Posted by kurokitty at 12:30 PM No comments: 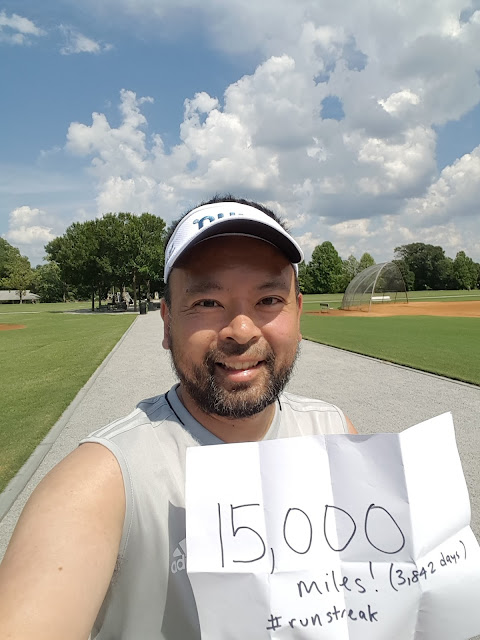 I didn't get too far today, running less than 3 miles when I needed a little less than 8 to put up 15,000 miles for the run streak.

But then, later in the afternoon, I got a second wind. Part of it was it was during the hottest part of the day -- 90 degrees. I knew I was properly heat acclimated and wanted to prove it -- so I set out to do the remaining 4.8 miles I needed.

It was nice. I got sweaty. At about 2.6 miles the Atlanta United sleeveless training jersey I wore started to bead sweat right on my back as it did the first time I wore it. It felt weird the remaining 3.25 miles of the run.

But I did it. I finished near the Active Oval in Piedmont Park, so I trotted up there for a picture.

My daily average has risen to more than 3.9 miles a day since the last time I checked. Will be interesting to see what else is in store. 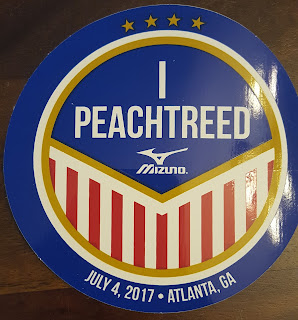 The day before my 13th Peachtree Road Race we were greeted with news that the Atlanta Track Club increased the race's alert level to red because of high heat and humidity.

On race morning, it was 72 degrees out. It just seemed like another day for the streak. Still, I decided to wear the lightest singlet I owned, a simple Mizuno top.

Once again, thankfully, my father-in-law drove us race morning up Piedmont Avenue as far as he could go. We got out and the walk was about a mile, making our way up to Peachtree Street and around to the Lenox Square parking lot. I had a lot of trouble getting a warm-up last year because of the crowds and I noticed people doing laps in the parking lot. Since we'd already walked a good distance, I decided to not do a warm-up.

My thought this year was to not try to run at the pace I did two weeks ago at the Possum Trot but one that was a little easier given the weather conditions. So when the race began, I had my sights set on a 7:20/mile pace.

I could feel immediately in my shins that the muscles were not getting loose and I really lamented not doing a warmup. In the first mile you frequently dodge people, even in Group A, and I ran it in 7:27. I continued on and down the course. Mile 2 was 7:20, what I'd expected to run.

I should have known that my running was going to be off today, as I ran Mile 3, which includes the start of the slight hill before Cardiac Hill, in 7:26. In previous years I've run that mile a little faster than miles 1 and 2 because of the steep decline to the base of Peachtree Battle and it's usually the place where people speed up, only to hit the hills.

Going up the hill I focused on a steady pace, my plan to conserve as much energy as I could here to be able to negotiate the double hill that leads up to Mile 5 later on in the race. As I climbed Cardiac Hill, I clapped as we passed the Shepherd Center, as it's always inspiring to see people here in wheelchairs cheering everyone on. My shins finally seemed to unlock but I wasn't really running too fast anymore.

When Mile 4 came I ran it in 7:56, which was not the worst thing in the world but not the best. I pulled out my race straw in the middle of this mile and got a cup of water. (I carried a GU gel that I didn't eat also thinking that I could have used a boost near the end of the Possum Trot).

My plan for Mile 5 felt ok, I just couldn't run very fast. I kept on going and crossed that mile in 8:06. Soon I could see 15th Street and it seemed here we were on top of the very last hill on the course (it actually dips a bit and there is a slight rise to 14th Street).

Here I hoped to run steady for the last mile. I didn't feel like I did last year when it was so warm out that I just wanted to quit the race. I made the turn onto 10th Street and started calculating how much race was left. I really just wanted to truck it in until I saw the Mile 6 sign (I don't know if there actually is one at the end of the course. My Mile 6 was 7:27).

Finally the downhill came and I put myself right behind a taller guy and we trucked it in to the end (my watch says I ran the last .32 miles of the race at a 6:31/mile pace). I finished in 47:45, my third fastest Peachtree I've run but kind of a shock when you've run 45:26 a few weeks earlier.

I hadn't trained for this race, especially this year when it fell right between the half marathon I ran at the end of May and a new training block that will start soon for some fall races. But I was still a little disappointed, as I thought I was properly acclimated to the heat and maybe I still had a little bit of the pace I ran the Possum Trot in.

I've also had trouble with multi-block hills since the start of the year in many races. I'm not sure what I will immediately do to remedy this but this somehow has lit a fire under me. It's only taken me 13 races, but I plan to be ready for the 14th.

Maybe. Depending on what else I'll be running for next year.