This year was a little bit of a challenge in that I only ran 100 miles or more in a month five times, including this month. But it was a year in which I made my first PR in 2.5 years.

I guess we will have to see what lies ahead for running in 2014!

Last month when I ran in the Atlanta Track Club Thanksgiving Half Marathon, I did something that I hadn't done since August 2012 -- I ran 30 miles in one week.

I was surprised it had been that long, especially since I ran in the 2012 version of the half marathon -- 13.1 miles could be a huge chunk of 30 for the week.

This week, however, I did something that was equally rare -- I ran 30 miles for the week, but in a week in which I had no races.

Having parents and in-laws over obviously freed me up to go longer during several days. I ran to Candler Park, enjoyed running along the Publix Half Marathon course to the edge of Georgia Tech and put in a run to Atlantic Station, along a training route that helped me complete two marathons in 2010.

It was nice to see that my running is still doing ok and that maybe I will be able to do longer distances in the months ahead when the little one starts preschool. 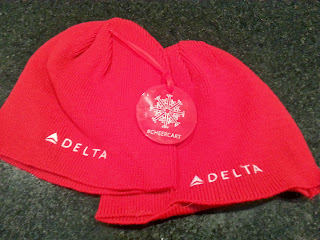 Members of Delta's #cheercart gave out hats, scarves, luggage tags and bottled water after the race.

This race has been on our radar for a while -- only we've been out of town most times that it has run. This year though, the timing was perfect for it. Even still, I think it took a $5 active.com coupon to get us to register.

Unlike last week's rainfest 5K, this morning had nearly perfect racing conditions -- 57 degrees, kind of cool, not hot at all.

We walked down to the starting area. There were a lot of people with Santa hats (you get them with the $35 race registration), so I was already thinking that this would not be a race that would give a fast time. Add to that the course has a HUGE hill in the middle of it -- I have had the pleasure of having to run up it in October 2008 when I was just treading water as a runner.

Anyway, the race started, and it felt pretty congested. Getting down to Ponce de Leon Place was a blur and then as soon as we crossed over Virginia Avenue, I felt that home court vibe kick in, since it pretty much was in my neighborhood.

I ran up the Courtenay incline and when the main hill came, I felt like I brought a rocket engine compared to the rest of the field making their way up the hill. On the downhill on the next street over, I recall some teenage girl was actually sprinting down it to create separation but I was pretty emboldened and caught up to her at the bottom of the hill (my stats show I went sub 6:30 to do this).

Back on Courtenay with barely a half mile left in the race, there's another hill leading up to North Highland Avenue. I gave another push past the runners here, including a pair of guys who I felt could outkick me at the end. But I did it anyway and then made my way to Morningside.

I held up until the turn and then tried to just kick it in. There's a downhill here and it was a fast finish. No one outkicked me here and I felt extremely good at the end.

With slow starts in congested races, it's hard to say if I have enough in me to put together a complete race to qualify for Group A of the Peachtree. I think the odds right now are that I won't be able to run a sub 48:00 10K in February but races like these provide a focus of what kind of running I need to do to get there -- and confidence that I still have some legs left when I need them.

After living in Atlanta for more than 10 years, I don't think I've ever run in a race in which it actively was raining.

Until today, when we ran in the Inman Frosty 5K. But it was more like rainy and frosty. I brought out my old Nike Air Pegasus+ 29s from the donation bin because I hate having to wait for my daily running shoes to dry after getting them soaked (takes a few days).

We ran in this race last year and back then I noted some problems with their check-in and course. This year there were improvements -- perhaps because of the rain, they had all of the check-in inside the school's gym. They had more than two spots to get your race bib, which was great.

It was nice to warm up a little bit in the gym, although our stroller (and probably us, too) was leaking water on the gym floor!

We all made our way outside and the start was similar to what I noted last year. We staged on the sidewalk and on the road.

Only this time I think because of the rain it didn't seem to be that big of a deal. It wasn't long until the gun sounded and we were off.

Although the rain was starting to soak through my windbreaker, the temperature felt perfect. When we were about a mile into the race, my shorts were totally soaked -- it felt like I was swimming!

We took it easy in the race and the pace seemed pretty leisurely. The race comes and goes on the Beltline but this year it didn't seem to be much of a problem with runners being in each other's way.

When we came off the Beltline onto Ponce de Leon Place I couldn't tell if the end of the course had moved from the intersection with Virginia Avenue.

But it didn't ... and we finished the race. I ran it 1:10 slower than last year but I think the weather had a bunch to do with it.

In any rate, it was cool to support a community group and the T-shirt was nice, too!

I was submitting some points at mcr.com (My Coke Rewards) and found they are offering $25 Nike e-gift cards at half the redemption cost for the holiday season.

If you have 1,000 points, you're really in luck because you can redeem up to two gift cards per account.

It's come at a good time since I am about to donate both pairs of my backup shoes -- my last pair of Nike Air Pegasus+ 29s, which have 438 miles on them and my $30 Costco Adidas shoes (which have 358 miles on them).


Posted by kurokitty at 8:41 PM No comments: