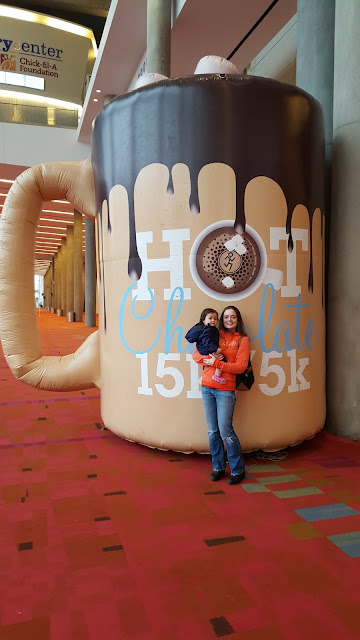 As early (late?) as the Jeff Galloway 13.1 in December, I'd thought about signing up for the Hot Chocolate 15K as a warm-up for the Publix Georgia Half Marathon in March. But after I set a new PR in the Red Nose Half Marathon a few weeks ago, I decided that a few weeks of rest were in good order.

So I decided to see if the wife would be interested in a last-minute entry to the race, as she also is training to run in the Publix half marathon. It also seemed like good timing on her schedule, as her longest run was 7 miles a few weeks before. (The 15K was her longest run since running more than 8 miles with me in Battersea Park in London in December 2011 when she was five months pregnant!)

Although we thought we were going to go to the expo on Saturday, we decided to go on Friday after she got home from work since it seemed at the time possible that the roads might be messy Saturday morning.

The roads were clear and the expo was a great treat, especially when local races that require packet pick-up increasingly have shied away from expos and instead have runners pick up their bibs from specialty running stores.

Lots around the Georgia World Congress Center were charging as much as $15 (!), we parked in the Yellow/Gold deck that is in between the center's Building C and the Georgia Dome. It only cost us $3 for the time we were there.

Almost as expected, the hot chocolate expo had plenty of hot chocolate. They had chocolate-dipped marshmallows and the little guy particularly loved drinking hot chocolate. We were able to pick up some race-day items at the Big Peach booth and I was able to sign up for the Big Peach Sizzler 10K on site instead of registering online.

Saturday I went on a run in 27-28 degree weather to fix a few geocaches and thought I was only going to run 6-7 miles but ended up running a full 10 miles. For the most part the sidewalks and paths were ok although there were a few spots on the Freedom Park PATH trail that were icy.

It was a good test of my winter gear -- I wore two long-sleeved technical T-shirts and a windbreaker and my Brooks Spartan pants. My hat came off around Mile 8 and while I wore gloves the entire time, they were two different kinds -- my index finger of my left hand was really cold wearing a fancier North Face pair while my right hand was very warm in a pair of simple cotton gloves The Weather Channel gave out at the end of the 2008 Thanksgiving Half-Marathon.

Race day worked well. I drove on Boulevard down to Atlanta Avenue and drove up Hank Aaron Drive from the south as far as I could go to avoid race day road closures and dropped off the wife. The race's text alerts worked perfectly and although my wife has only had time to run about 12 miles a week, she ran the first 5K and 10K portions of the race at an 8:20/mile pace and finished at an 8:31/mile pace!

Definitely sounded like a very well-put together race. It was nice to not be racing and I could just enjoy things like the expo without worrying about how I was going to do the next day during the race.
Posted by kurokitty at 2:13 PM 1 comment: 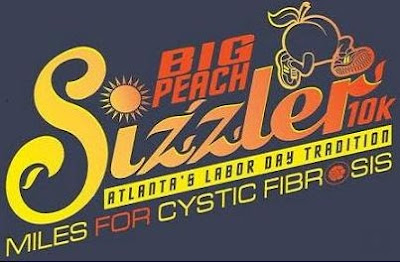 Starting today through Sunday, if you register for the Big Peach Sizzler 10K, the price is $28 with the discount code SIZZLERHC20 on Active.com.

What I'm not sure is whether this deal will be available registering in person at the Big Peach Sizzler booth at the expo for this Sunday's Hot Chocolate 15K/5K (the email I received says you can get a free shirt if you sign up at the expo). I'll make an update if I see this deal there tomorrow.

The race is held on Labor Day, which is Sept. 5 this year. It's a pretty fast race with some rolling hills from right outside the Chamblee MARTA station to Buckhead. I ran in it last year and in 2009, on my 1000th consecutive day of running.

UPDATE: We went to the expo this afternoon since we weren't sure how the roads would be tomorrow. I was able to sign up for the Sizzler for $28 there, so I wouldn't have to have Active.com fees. Plus they threw in a T-shirt from last year's race!
Posted by kurokitty at 10:12 AM No comments:

COLUMBUS, Ga. -- For a while now I've had a running streak nearly twice as long as my nine-year consecutive day streak -- an almost 18-year drought in being able to best the very first half marathon I ever ran in.

Over the course of the next 27 half marathons, in places like Oregon, Las Vegas and Chicago, my initial race time of 1:46:30 was out of reach. One year, at the Run the Reagan Half Marathon in Snellville in 2011, I came within 30 seconds of the mark.

But finally today, after my 29th half marathon, I was able to get that monkey off my back. I made my second PR for that distance by finishing the Red Nose Half Marathon in 1:44:50.

There's a lot of symmetry between the two races -- both are more or less low key affairs put on by the area running club. Both courses are flat and the weather was great. I also drove at least two hours from where I lived to the starting line.

My first half marathon (Vancouver Lake in Vancouver, Wash.) became my long-lasting PR because of what I didn't know about running those races. Basically, as a 27-year-old, my strategy was to take it easy the first three miles and then make my move. I passed all kinds of people the next seven miles, until I hit the wall.

After that, the last three miles were misery. I inched along, watching all the people I passed pass me. Yet when I crossed the finish line, I received a time that stuck for years. Once burned by running too fast, I took it easy in subsequent races. I've only learned about proper pacing in the last few years.

I found out about the Red Nose Half late last month when I was looking at upcoming race listings. For some reason I clicked on the link and found out that it was a free USATF-certified half marathon on a flat course!

I signed up for it thinking this might be my chance to finally set a new PR. I'd come close last year with two 1:47 halfs on hilly courses, in the Aug. 23 Hotlanta Half and the Dec. 13 Jeff Galloway 13.1.

This year race organizers had to made changes to their traditional course because all the recent rain in the area caused flooding of the Columbus Riverwalk. The course still primarily was on the riverwalk but also was muddy in some areas (I saw one runner who looked like he had made snow angels in the mud as he had huge mud spots from a fall on his shorts, singlet and along the entire length of his right arm).

My thought was to run as close to an 8:07/mile pace as I could to make a PR. But it was extremely difficult to run at the right pace -- sometimes I was running faster than an 8 minute mile and other times it seemed like I was creeping up to 8:30/mile. I waited until Mile 6 to eat my first GU gel (I'd planned to do so at Mile 5) and consumed the other one at Mile 11 when I wanted a boost for the finish.

By Mile 12 I believed I could run a 10-minute mile and still make a PR (this was close; my data shows that I could run a 9:30/mile and still do it). I continued to run pretty steadily and the race's end involved two short hills, one to get from the Riverwalk to street level and another one a slightly evil hill just a few hundred feet from the finish.

I was going to take it easy but decided to scramble up the hill and kick after I passed a wiry guy who I thought was going to climb the hill strong but seemed to struggle. On the final flat when I kicked, I could feel two twinges in each of my calf muscles as I made my way to the finish.

I finished in 1:44:50, which was way better than I thought I could do. The result is more on line with what race prediction charts say I could do. Finally, a huge running goal was accomplished.

I think in the end, the flat course really helped me. In Atlanta races I could feel myself slowing down up big hills and then not being able to gain speed back even on flatter surfaces. I also paid attention to Mile 12, since in the JG 13.1 that mile was inexplicably slow even though it was through one of the areas of Piedmont Park I run the most.

We lucked out with the weather for this race; it was about 55 degrees the entire way and not rainy or cold. I'd love to do this race again in the future -- what a great thing for the community to throw a race for free in an age when these races easily cost $80 or so.