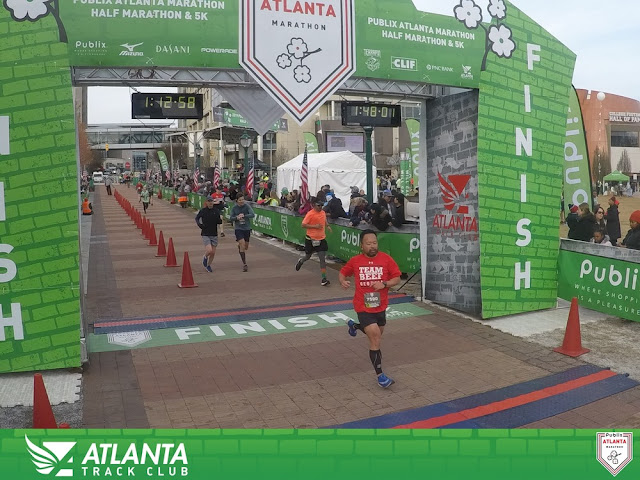 Prior to Sunday, I've run the Publix Atlanta Half Marathon course, in its several iterations, seven times. Six for the half and one for the full, in 2010. It is my favorite course around the city and one I call a meat-grinder for its many unforgiving hills.

Only once had I bested it, in 2016, following a jerk who kept bumping me on North Highland Avenue and ran off at an incomprehensible speed, leading to my then-PR of 1:42:40. Since then, I'd largely avoided the race until a few weeks ago when the Atlanta Track Club revealed the race shirts, which I liked.

So I impulsively signed up for it and then struggled to figure out how to fit it into my marathon training schedule. I pretty much have a no-extraneous race rule after getting a stress fracture after running a half marathon a few weeks before the 2016 Chicago Marathon.

In past races, I used to take advantage of free Sunday street parking downtown on race day but remembered that in the 2016 race I almost wasn't able to find any. This time around, I left home at 5:45 a.m. and parked on the street a mile away in Midtown. Then I hoofed it to Centennial Olympic Park where the race began.

After gear-checking the Nike Odyssey React shoes that I ambled over in, I slipped on a pair of Nike Vaporfly 4 percent racing shoes that I pretty much only train in. I debated wearing a pair of Nike Zoom Fly shoes since I wasn't going to run this race hard but then I thought, at this distance, why not run in a fast shoe?

I've actually had great results wearing both shoes at the last two Jeff Galloway 13.1 races -- a 1:41:47 in 2017 wearing Zoom Flys and a 1:41:15 this past December wearing the Vaporfly, although I probably would have run it a few minutes faster if I hadn't developed calf cramps at Mile 10.

I still had a few minutes to kill before the race and it was cold. Fortunately I remembered the 2016 race start, in which I didn't think I needed to bring anything before the race and ended up begging to huddle with the wife and her mylar space blanket before the gun went off. I brought an old painters jacket that they gave me at one of the Jeff Galloway halfs and planned to toss it when the race started.

Fortunately the Omni Hotel next to the race start was open and I was able to use the bathroom (no lines, I was surprised) and then wait in a warm lobby until a few minutes before the start. When the race started, I took it easy. It was really congested anyway and now I'm surprised to see an 8:34 mile -- I thought my watch said something more like slower than 9 minutes.

When the race turned off of Piedmont Avenue down North Avenue, I tried to focus on the downhill slant as per my downhill marathon training program. It was nice to be on a familiar stretch up Central Park Avenue (this course overlaps the Jeff Galloway half here). Then after a few turns the course goes over Freedom Parkway and toward Auburn Avenue and the resting place of Martin Luther King Jr. and Coretta Scott King.

At this point I'd still been wearing the painter's jacket over my technical T-shirt. I ended up taking the jacket off and balling it up to hold in my hand. I'd planned to toss it but I remembered the family might watch the race in Virginia-Highland, so I decided to hold it for a few miles and see if I could drop it off.

After crossing through Little Five Points, the course turns off Moreland Avenue and up the start of Freedom Parkway. I made my way past a bunch of people and there was another Asian guy who also was running pretty fast up it. His pace was faster than mine and I didn't want to press it at this point, so I ran to the right side of the road so as to not be caught up with his pace.

At this point there also had been a teenage boy running with maybe his mom. They both had a pretty good pace -- the teenager was running fast back and forth ahead and behind in spurts -- but I didn't think it was going to be sustainable for them. It's distracting to be going back and forth with people in a race and eventually after turning up North Avenue again I lost sight of them. I used to really fear this hill here but this time it didn't seem like much of anything.

Finally I was on North Highland Avenue and it is always comforting to be back on home turf. This part of the course is gradual downhill and then turning onto Virginia Avenue is downhill with a brief uphill to John Howell Park and then back downhill. At this point I didn't see any sign of the family so I decided I would ditch my jacket in a bush on the side of the road at the park and just when I did, I saw the family on the right side of the road! I made an abrupt turn back to the right to drop off my jacket and continued down the hill.

As I ran down Virginia Avenue at about Mile 8.34 I finally had my first gel since the start of the race. In training I typically have them every four miles and I'd brought enough gels to do this. But I'd been passing the water stations as I didn't want to dig out my straw. I finally just decided to eat the gel and then find a water station. I dumped the empty gel pouch in a trash can at Virginia and Park Drive.

At this point I discovered I'd been going back and forth with a woman who I didn't think could sustain the pace, but maybe she could? Finally in Piedmont Park she went right to grab water and I decided to grab water on the left in case there was going to be more fast paced back and forth. Fortunately there wasn't for the rest of the race.

On the turn out of the park onto 10th Street, I'd been steadily running faster with a 7:48 Mile 9. On these rolling hills I discovered that I could front these hills at pretty much full speed without penalty. It felt crazy. So I rolled up Juniper this way, up over Peachtree Street (Mile 10 was 7:45) and then down past Bobby Dodd Stadium (Mile 11 was 7:41).

Up the double hill on North Avenue along the stadium I cut to the outside and literally was passing dozens of people. I looked at my watch and I was running at a 7:17 clip. I came back down and then up Techwood Drive and Mile 12 was 7:30.

I literally was flying down Marietta Street. After about a quarter-mile, I came upon an older guy who impressed me. He was doing the marathon and was moving at my clip, about 7:25/mile. I should have complimented this but I didn't and before the Luckie Street stoplight he fell back. At this point I remembered I had about a half-mile and three more stoplights to go.

In pretty much every race I've run on this stretch in the past, I've always had calf cramps or tinges on this street. But nothing so far. Mile 13 was 7:25 and when I came upon the final turn I was accelerating well. I finished the last two tenths of the race at a 6:37/mile pace and passed people on the straightaway.

I finished in 1:44:39, which is a time I'm happy about since I started off really slow. I'd caught up with the tail end of Corral A and after I crossed the finish line, one of the 1:45 pacers (I didn't see them the entire race) gave me a high five. It gave me a huge confidence boost as I'd struggled to run faster paces in recent tempo runs. I think a lot of leg strength work and physical therapy has really helped me this marathon cycle. 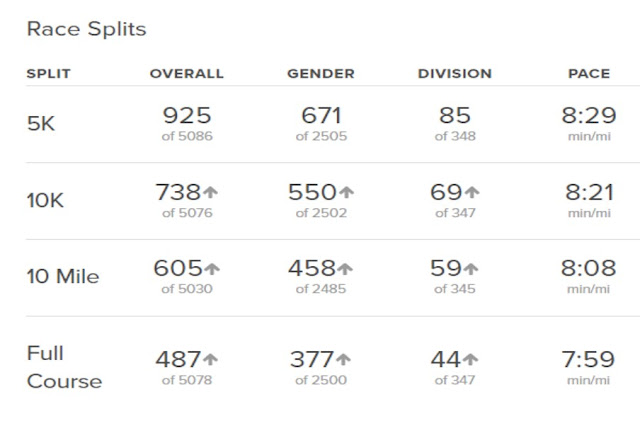 It sucked to have to walk a mile back to my car (and then to basically repeat the miles again later in the day for the Atlanta United game) but I'm happy to report that I didn't have the hip strain that dogged me after the December Jeff Galloway 13.1.