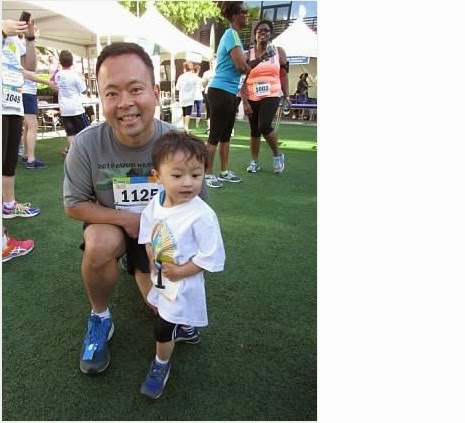 Even worse, I could see this was true -- about a dozen people passed me at pretty furious paces as I approached the finish line.

Four months later, I can tell I'm a different runner. Today in the Be the Match 5K in Atlantic Station I ran aggressively at a good pace, even breaking free of a pretty congested and slow start. Near the end of the race I was sure there were about three guys who would outkick me but I outran each one to the finish.

My 23:06 finish is the fourth fastest 5K I've ever done, over maybe three dozen races. It was just six seconds from qualifying for Group A of the Peachtree Road Race.

(My Garmin data said I ran 3.26 miles, giving me outlandish pace splits of 7:06 an 6:58 in the second and third miles. I'm discounting this data, which is probably inaccurate because of skyscraper bounce in the area. Over 3.1 miles, a 23:06 finish is about 7:26/mile).

The race ended up being fairly flat as this version of the race eliminated the large hills up Northside and on 17th Street near IKEA.

That said, there were a lot of turns, especially at the end. I remember that I started to sprint after turning into the shopping district off of 17th Street only to learn that we still had to run two blocks, turn and run one block and then run two more blocks before turning to the finish.

Posted by kurokitty at 10:40 PM No comments: 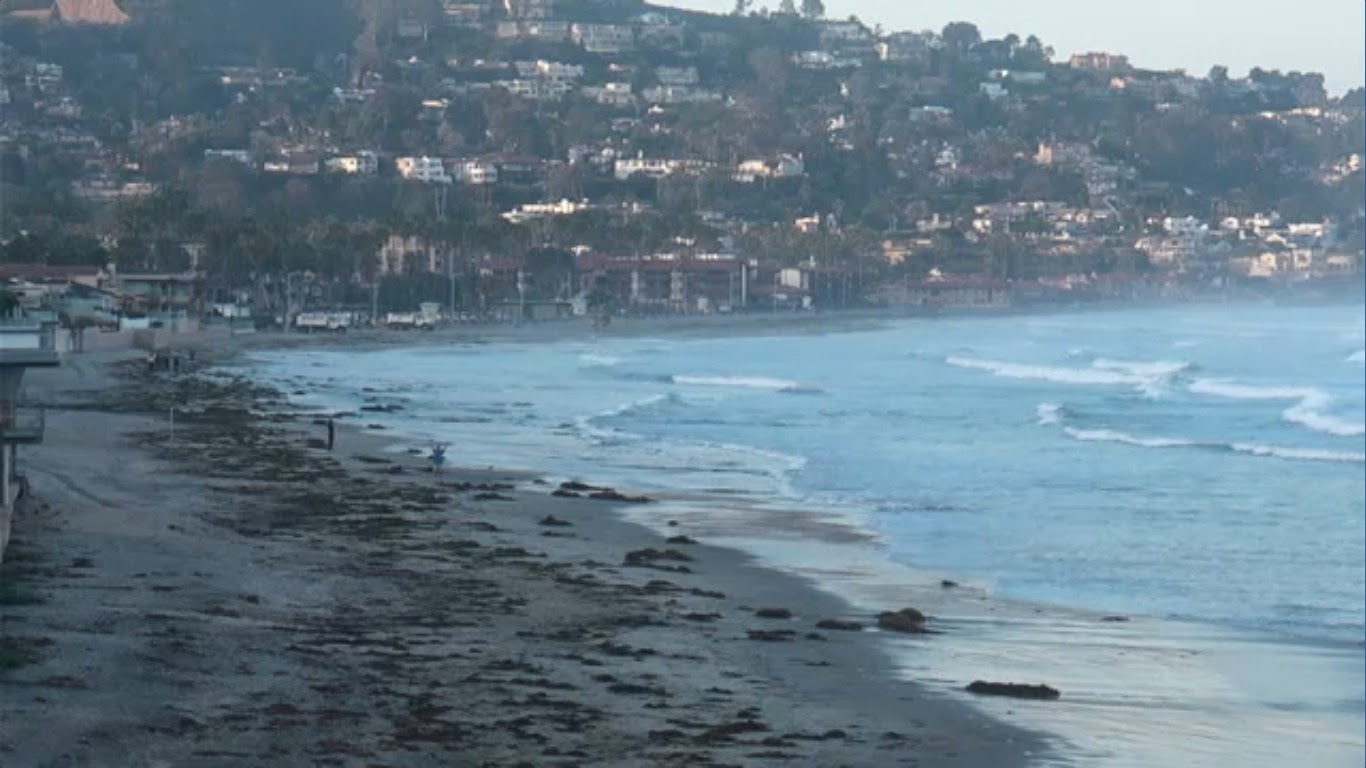 It may be hard to see, but I am standing on the beach in a blue shirt with my arms up in the air for the pier cam.

LA JOLLA, Calif. -- Our last morning in San Diego I decided to run about a mile down the beach to get a web cam cache via the Scripps Oceanography Pier Cam.

Normally I usually can pull up these camera images on my smartphone but the site was not compatible with my phone so I had to do it the old-fashioned way -- I had to get to the spot and then call up the wife to capture the image on my laptop.

It had been a while since I'd run on the beach. Luckily with the tide going out (and not many people up at 6 a.m.) the sand near the water was pretty level and flat.

Unfortunately on the way back that was not the case as a bulldozer-like vehicle was tilling the sand behind it. It was a little bit of a challenge but not too bad.

It's usually better for me to run in the morning when I have the chance when I'm traveling. When we got back to Atlanta it was still daylight out but I'm glad I didn't have to worry about a run when I finally got home.


Posted by kurokitty at 1:18 PM No comments: 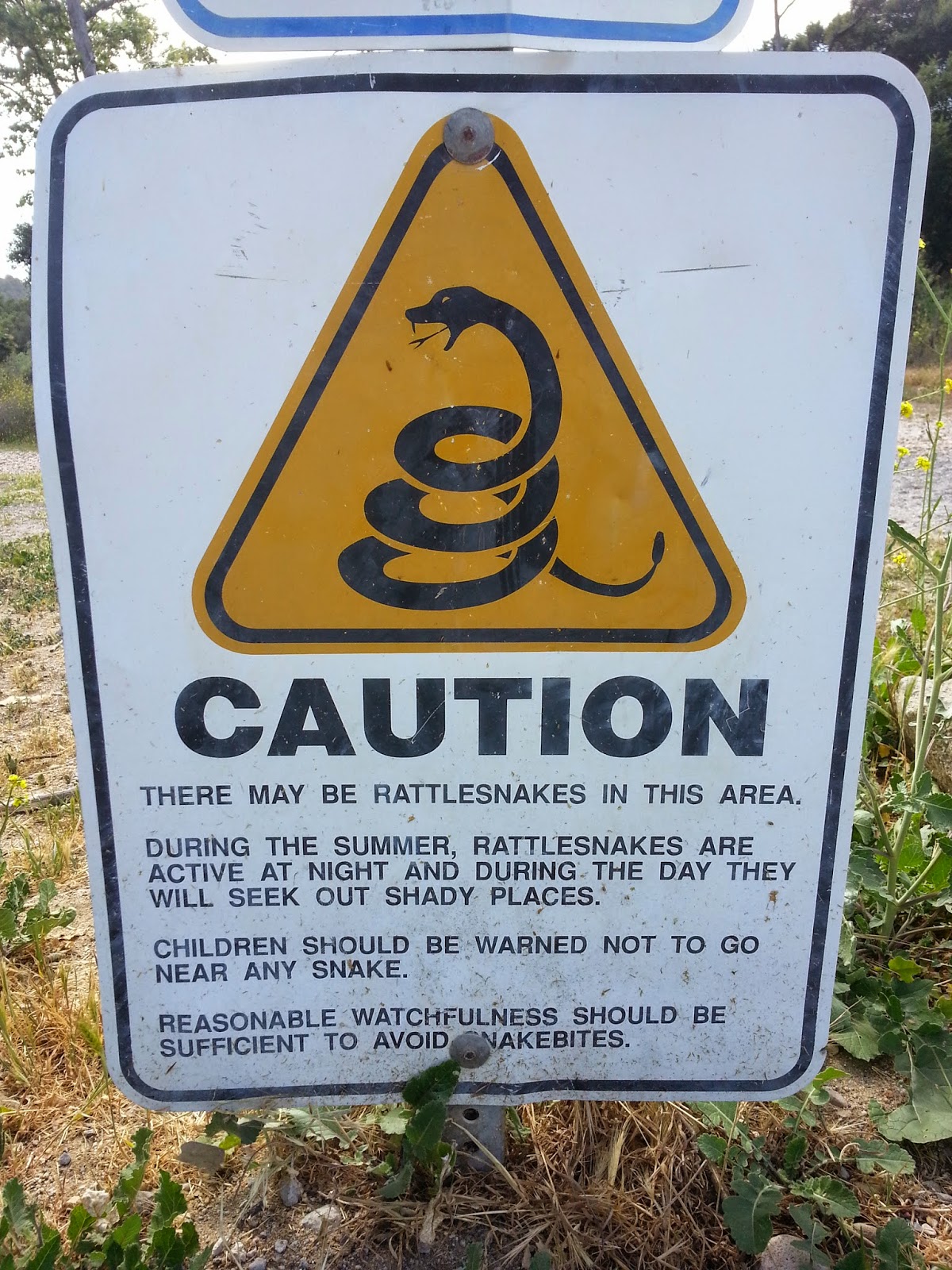 SAN DIEGO -- A funeral brought us back to San Diego and in the morning and afternoon I was able to get out into the San Clemente Canyon for some running -- and caching, of course.

The great thing was there were good trailheads (with restrooms) and parking lots to start. Nothing like throwing yourself in the middle of rush hour traffic and not knowing where to park.

The trails were fairly wide and were a mix of dirt and sometimes smooth rocks. It made for perfect conditions for my travel running shoe, the Solomon Sense Mantra.

The picture below is the view from one of the places where I ultimately turned around. From the bottom of this hill it was only 200' to the cache. I walked up it and was totally gassed. The run back was pleasant, although I was worried whether I'd touched any poison oak that liberally was sprinkled along the trails.

I was happy though to get in just under 6 miles from the four different runs I did today. And a fair number of caches to boot. 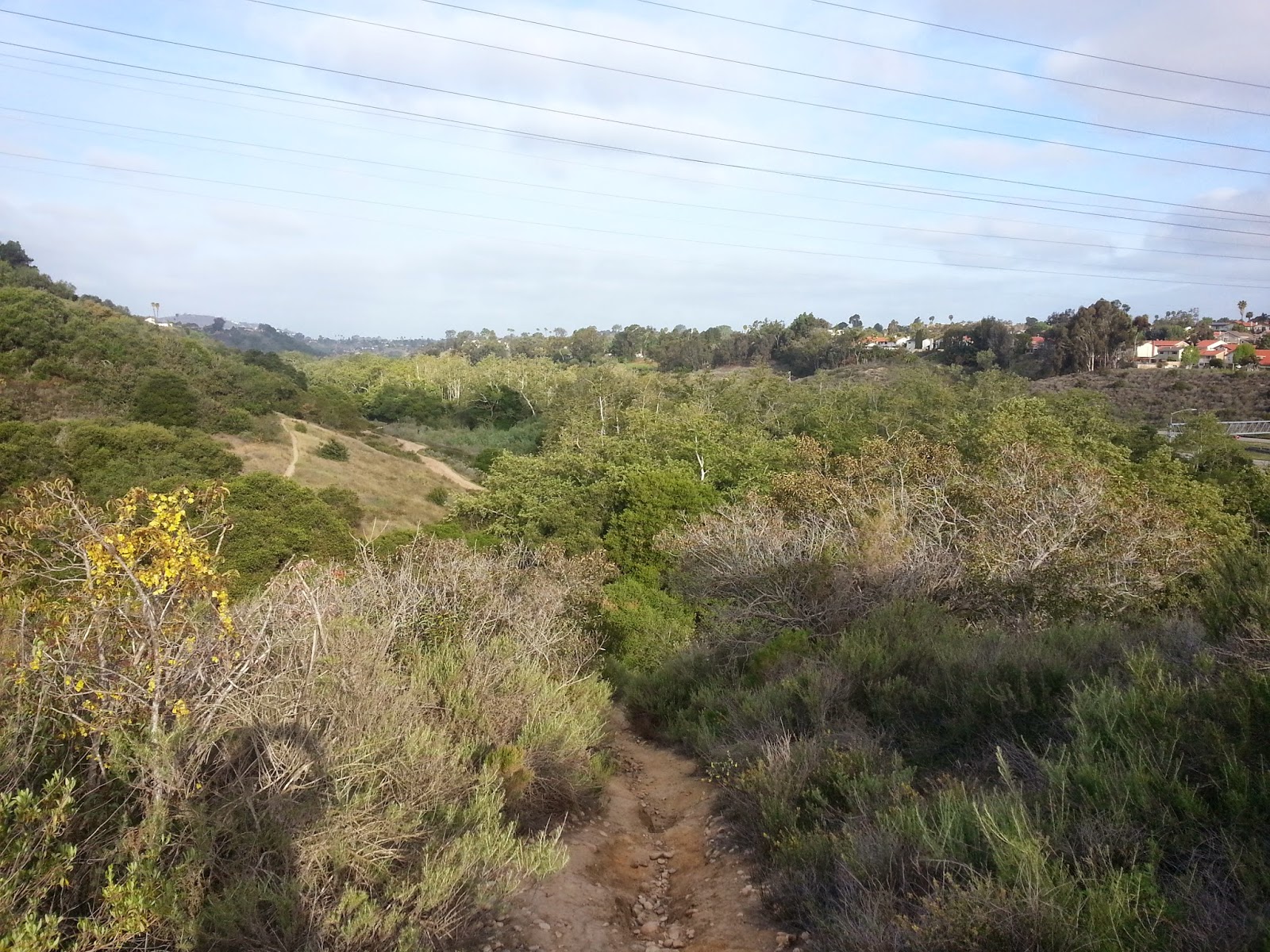 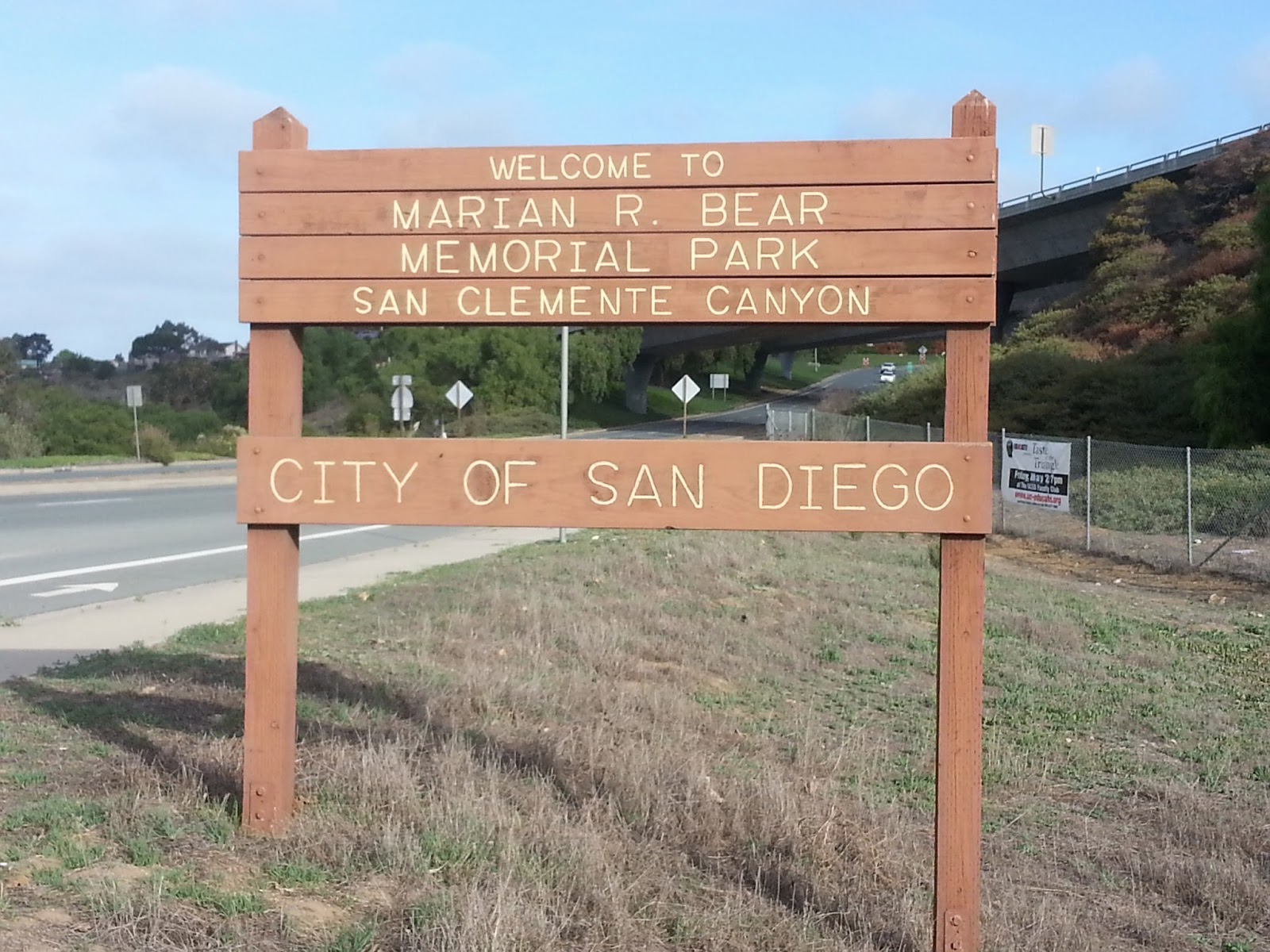 Posted by kurokitty at 1:08 PM No comments: 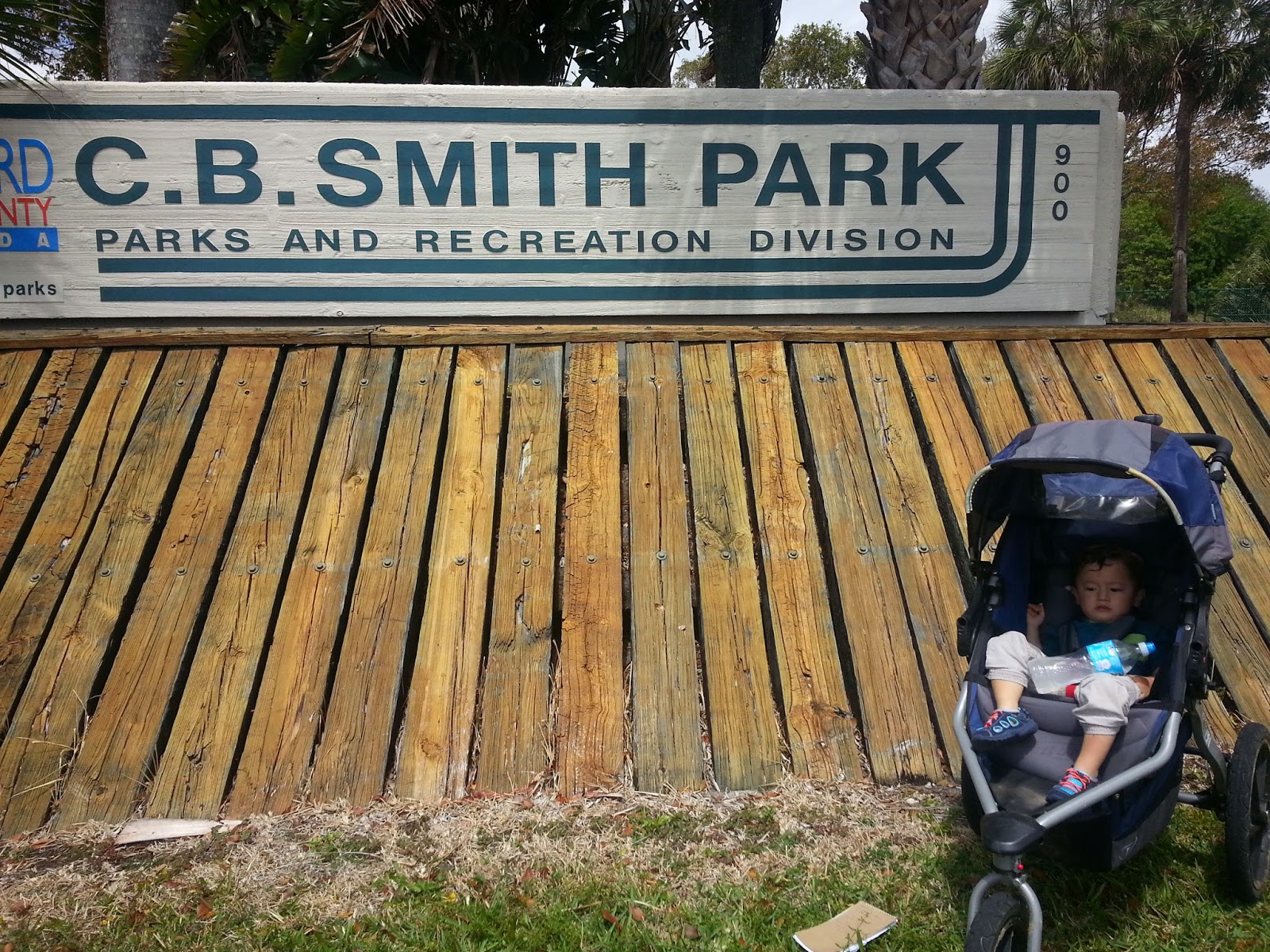 PEMBROKE PINES, Fla. -- It was fun running along the sidewalk, picking up guardrail caches along the way, until there was no sidewalk.

We flew into Miami for the wife's conference. That left me and the little one free to see the beach ... and get in a run.

At first it wasn't too bad running with no sidewalk. But eventually it got to be too much, so I cut short my plan of running up to 13.4 miles and came back around the perimeter of the park, for a little less than 3 miles.

It was the first time I ran in my Solomon Sense Mantra lightweight trail running shoes. They were intended to replace my everyday walking/caching shoes but when I got them, I realized these are really more like running shoes and less like my heavier Solomon Ultra X3 trail running/hiking shoes. They are excellent for travel and running, though and it is nice to not have to carry a second pair of shoes for as short of a trip as this is.

It was just as well, as when I got back to my car in the park, I realized I left my driver's door and passenger door behind it completely open!

As always, though, it was pretty nice to be running in 70-degree weather in Florida.

Day 2,655: Entered the lottery for the Paris Marathon!

Today I saw a link on Facebook to a drawing to run in next year's Paris Marathon. So of course I signed up for the drawing!

I have no idea of the odds for this drawing. I've tried twice to enter the lottery for foreigners for the London Marathon but have not been successful.

There's a great recap of the 2013 race by the blogger DC Rainmaker, who I have relied on for Garmin Forerunner reviews in the past. It includes what happens when there are way less porta-potties for 50,000 runners and lots of great pics -- all while running a 3:23 marathon!

In recent days, I've been trying to just keep my mileage up. It took me two days to recover from the Publix Georgia Half Marathon. After that things seemed to have been normal. I've been taking it easy, just mainly enjoying running but still trying to run more than 40 miles a week.

We're doing three 5Ks and the July 4th Peachtree Road Race but it's nice to know that I don't need to worry about any kind of training schedule in earnest until late June when the marathon training will begin.

Posted by kurokitty at 9:06 PM No comments: