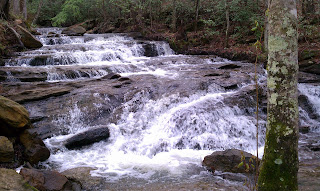 LITHONIA, Ga. -- Today I decided to park at the Davidson-Arabia Mountain Nature Preserve and take the PATH trail from there.

Already I thought it was much better than when I visited Panola Mountain State Park. The PATH trails here give you a nice diversity of the wilderness, from a granite rock trail (that's off the PATH bike trail) to forest trails that have a few waterfalls like you see above.

The one thing that detracts from this beauty is ... gunfire. At first I thought it was some careless locals plink shooting in the country but there is a police firing range near the park. So don't be alarmed.

I made my way from the Nature Preserve to somewhere around Milepost 6 where there was a spur for the Laurel Creek trail.

I didn't even come close to getting all the geocaches here, so I'm sure I'll be back! 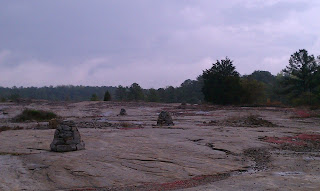 Stone markers guide your way along the Mile Rock Trail
Posted by kurokitty at 8:57 PM No comments: 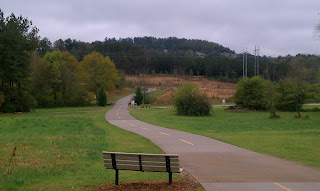 A view of Panola Mountain from the Arabia Mountain PATH Trail

STOCKBRIDGE, Ga. -- Today I decided to return to Panola Mountain State Park to run along the Arabia Mountain PATH trail in search of a few geocaches.

I didn't have a lot of time before I had to return to go to work and I actually made that time tighter by missing the turn from Snapfinger Road to Alexander Lake Road.

But I got there and put out my Georgia State Park Pass, which I've used seven times (or $35 in parking fees) since I bought it at Sweetwater Creek State Park.

Anyway, I started running and right away was impressed by this section of trail. It's very serene and full of interesting sights. Right away you see an old farm. Then around another curve are two long stone chimneys rising with the trees.

At about a mile, the PATH crosses a long bridge over South Creek.

Because I only had a limited amount of time, I couldn't go any farther than my second cache which was near an old Civil War-era abandoned house. When I turned around to return back along the path, I got the great view of Panola Mountain that you see above.

I got a four-mile run out on a gloomy, overcast day that easily could have ended up being just a one-miler. 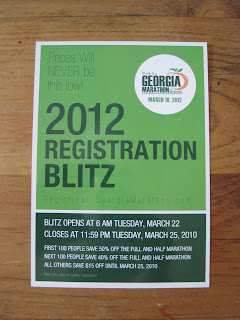 Early this morning was the start of the sign-up blitz for the 2012 Publix Georgia Half Marathon and Marathon.

For this past race, my fiancee and I took advantage of last year's promo blitz -- our entry fees for the 2011 race were $25 each, which is the typical price for a 5K race that doesn't give out goodies such as a technical T-shirt and a finisher's medal.

This year the price was nearly as good. The first 100 people to sign up got 50 percent off the registration and the next 100 got 40 percent off.

So that meant $25 plus an $8 fee on Active.com. I tried to sign us both up but it would only process one registration from my computer.

Who knows what we'll be doing next year but it's still to a good cause, a good race if I somehow don't run in it.
Posted by kurokitty at 10:26 AM No comments: 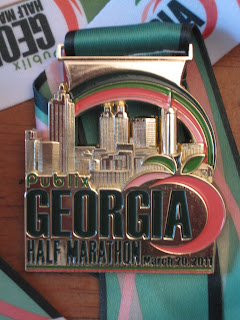 For several years now, this course has been a big monkey on my back. When I ran in the inaugural ING Georgia Half Marathon in 2007, it heralded a return for me to half marathons. It was my first one in nearly a decade.

As I came over the Peachtree/Ellis hill, I had a chance to break two hours. I finished in two hours, three seconds.

In 2008, my running shape wasn't enough for me to tackle this race again. The course had changed from Peachtree to back behind Georgia Tech and starting and finishing in Centennial Olympic Park downtown.

When 2009 rolled around, I had just enough fitness to run in the half marathon but not enough to run solidly. I finished in 2:03.

Last year, I decided at the last moment to tackle the full marathon. With my training, I wondered how I would have done in the half marathon.

This year, I finally had my chance and had several nice things going for me -- I ran under 1:47 in the Run the Reagan Half Marathon last month in Snellville. Then I went on about a week later to break a PR in the 10K with the Charles Harris Run that had stood for 13 years. Last weekend, I placed first in my age group -- something I'd never done before -- in the O'Highlands Jig and Jog 5K.

The start was nice -- it was about 61 degrees and overcast. It seemed a little fast for me but I decided to go with it.

By mile 3, my fiancee had a six second lead on me and by mile 5 this grew to 46 seconds. I decided to run my race.

Unlike other races in the past, however, I never found that extra gear to accelerate. I had no mile splits in this race under eight minutes. Although it felt comforting to pass a lot of people in the last mile, this wasn't going to be a fireworks kind of race for me.

In the end I finished in 1:51:23, which is way better than the last time I tackled this half marathon and is keeping in par with other halfs I've done recently.

My mileage hasn't been as good lately as I've chosen to taper for races and the races have come one after another. I'll have to get back on track soon.

It's a good barometer for me to make sure I keep my training in check as I pursue other hobbies at the same time. 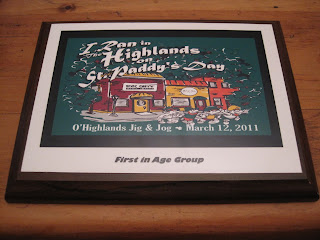 Today my fiancee and I ran in the annual O'Highlands Jig and Jog 5K in our Virginia-Highland neighborhood.

Although I didn't run the hilly course in PR time, I did do something I'd never before done in any race -- place first in my age group.

We started the race sort of easy. It ended up being a 7:30 pace. The next mile was similar and I had saved enough to start to kick around the last six-tenths of a mile.

I guess it was enough. The second and third place people in my division were about 30 seconds behind me.

I was 17th overall in the men's division (about 500 people of both sexes in the race). My fiancee did even better -- she was third overall for women in the race and placed first in her age category.

I ran in the race last year even though I knew it was so close to the ING Georgia Marathon.

I'm still glad I did. This year, with even the Publix Georgia Half Marathon before us, I'm happy I participated in such a fun community event. 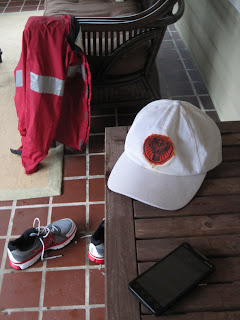 A bunch of soaked gear after this morning's run. Thankfully my smartphone was in a Ziploc bag.

I was procrastinating where to run today when I saw a new geocache popped up only a mile from where I live.

It had only been raining lightly and my running shoes already were wet from searching for a geocache near Emory earlier in the day. So I headed out and by the time I got to the find, some serious Hollywood-style rain poured out of the sky!

Luckily it was warm enough (56 degrees) that being soaked didn't feel bad. I signed the log then turned around and made my way back along the Freedom Park PATH. One of the nice things about being soaked is you don't have to worry about dodging puddles.

At least I had a windbreaker that worked part of the way and a good hat to keep it out of my face.

HIRAM, Ga.-- Was out at Sweetwater Creek State Park and decided to do a run on the Silver Comet Trail. Basically went down Thornton Road until the Home Depot in Hiram and turned to get to the trailhead.

Today it was just pleasant and it made me wonder why I haven't come out here more often.