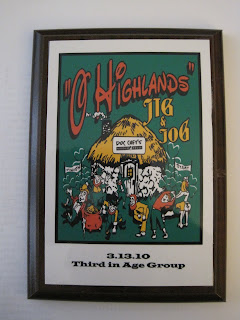 Although I will say it seems very counterintuitive to run in a 5K race just a week before a marathon, I decided after skipping the Charles Harris 10K race last month in Tucker, Ga. that I didn't want to miss fun races.

And, this time, I said, I would just take it easy. Of course, things like that are fine to say until the first hills come.

I ran over to the start, just less than a mile and even just decided to hold onto the race T-shirt they gave me, by tucking it into my belt pouch belt. Now a cat had a tail.

The race started on Lanier near the Doc Chey's restaurant. It basically is like a modified reverse Summerfest route -- we ran up the huge double hill to Virginia Avenue and down back toward Lanier, cutting across Stillwood and neighborhood roads along the way.

I took it easy at first but couldn't resist accelerating up the hills. By the second mile I was really running in it although I was for sure someone was going to pass me in the last mile.

But no one did. I passed one person at the very end, which was shorter than the 5K distance at 2.67 miles, according to the Hammer of Dawn. Later the race director said the race motorcycle went straight when it should have turned.

But no matter. I noticed that there weren't too many time cards ahead of mine in my age group's basket -- I placed 19th overall for the men's division. And I kept watch until later on when I could see the lady write my name down on the age group winner's list.

It's the first time that I've placed in an age category since I placed second in my age group in the Salmon Creek 10K on Dec. 18, 1999 in Hazel Dell, Wash. Since runners in their 30s and 40s are really fast, I really didn't think I'd see an award in this decade.

But a neighborhood race I guess has less prestige to the ultra fast runners. And, as a cat now knows, he has to be in it to win it!

So was it 2.67 miles? I knew it had to be at least a .25 mile off but felt like up to a half mile missing. Kind of annoying since we paid to race but oh well I guess.

I was all excited for my PR shaving some major time off. I did the math and if I kept the same pace, I still probably would have shaved about 20 seconds off but I guess I'll never know!!! :(

Awesome! You should run in the Summerfest 5K in June! It's practically the same course!